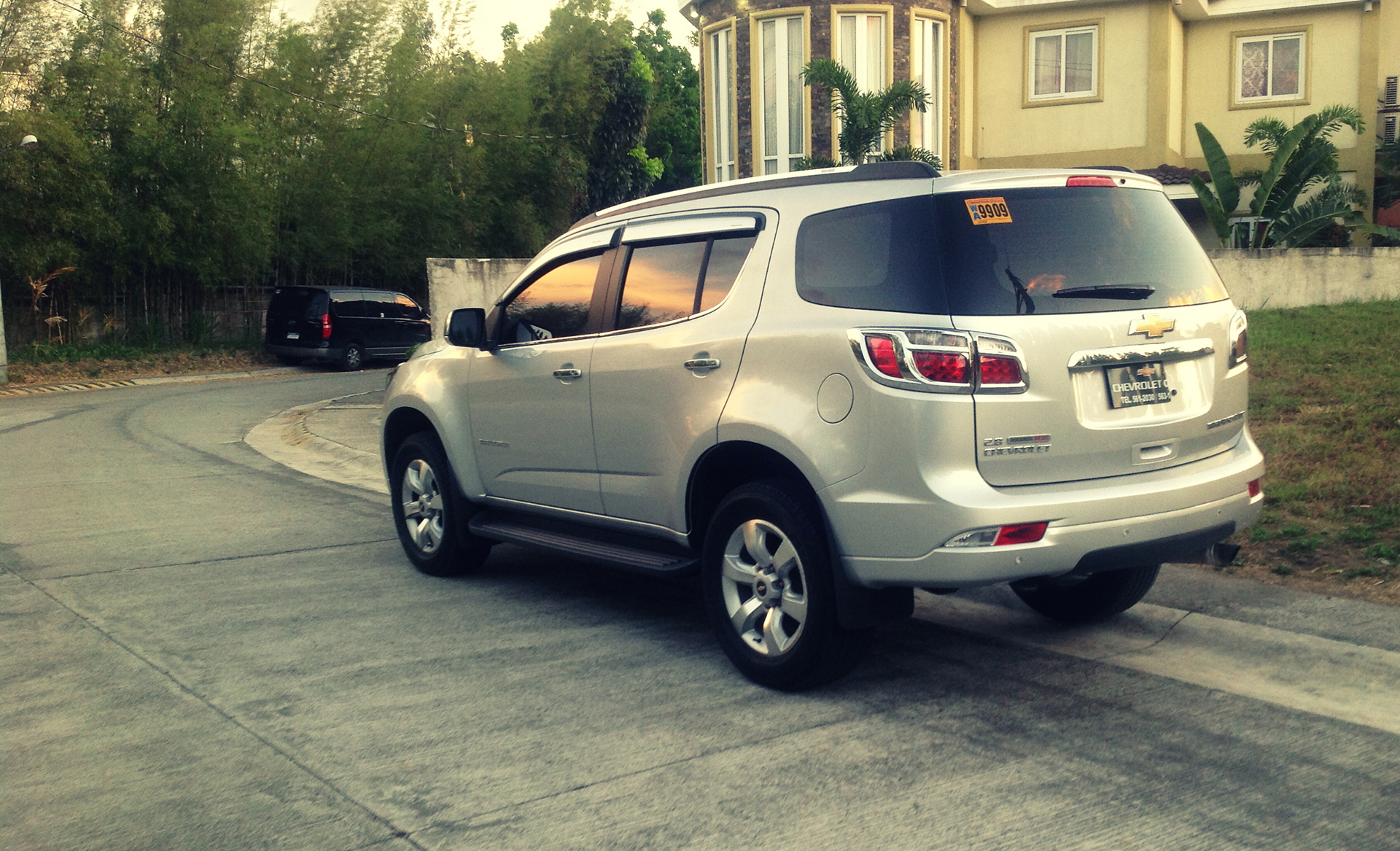 Out To Oust The King

As a whole, I love the SUV’s design. One thing that catches my eye first is Chevy’s signature grille. It is huge and certainly attention grabbing. The grille definitely increases road presence. Nothing in the design is conservative and the looks are definitely striking. I also find the design from the C-pillar all the way to the back to be really striking, including the tail lamps that definitely look sporty and are done in LEDs. The front shares some design cues from the Chevrolet Colorado, but that won’t be a surprise since both are on the same platform anyway. For the size, it’s actually one of the biggest in class. It’s length is actually 150 mm more than the Montero Sport.

Step inside the Chevrolet Trailblazer, and you’ll feel that unlike it’s competition, this SUV feels American. This may not be sold in the US, but so is the Ford Everest, and yet this Trailblazer feels much more American. Everything, from the chime I hear in every single move I do in the cabin, to how spacious, tall and huge this SUV is. The gauges and instrument cluster looks fresh with the calm blue interior lighting. It reminds me of the Chevrolet Camaro’s instrument cluster which is a good thing, as it makes the Trailblazer’s interior really sporty. The interior is a mix of grey, black, silver and beige color schemes and also makes the interior look premium. Hard plastics are used everywhere, but I don’t mind at this price point. They don’t feel scratchy and brittle at all. As this is the LTZ model, there are the usual array of leather seats, leather steering wheel, and (synthetic) leather inserts on the door.

Sitting in the third row seat is fine. Legroom isn’t generous, but it is adequate. Headroom is the problem. My 5 foot 11 height fits just right, but if my hair was styled, the ceiling would ruin my hair. In short, people 6 feet and taller won’t fit as the third row is better suited for children. As for the rest of the cabin, it is spacious, practical and roomy and I have no complaints about that. There is an abundance in cubbyholes and there are also two glove boxes.

The Chevrolet Trailblazer has the usual array of power windows, mirrors and locks along with an 8-speaker sound system that comes with CD, USB, AUX and Bluetooth Streaming and Handsfree. As this is the top of the line LTZ model, it has added features such as an Automatic Climate Control System, Projector-Type Halogen Headlamps, Power Folding Side Mirrors with LED Turn Signals, Rear Parking Sensors, Cruise Control, Power Driver’s Seat, and external upgrades such as chrome details and striking 18 inch alloy wheels. The LTZ also has added safety features over the base trim, such as ESP, Hill Start Assist, Hill Descent Control, Traction Control, Dynamic Brake Distribution, Hydraulic Brake Assist, Panic Brake Assist, Engine Drag Control, Cornering Brake Control, and Hydraulic Brake Fade Assist. Honestly, there are a lot of off-road safety features on the Trailblazer, and I haven’t properly tested each of them aside from the Hill Start Assist. If you think that the Trailblazer does not have GPS navigation, don’t fret. The Trailblazer is currently offered with GPS navigation as an optional extra, though on the Montero Sport, it is a standard feature on most trim levels.

Powering the Chevrolet Trailblazer is a 2.8 liter Duramax diesel engine with VGT. It produces 180 hp at 3800 rpm and 470 Nm of torque at 2000 rpm. The engine is actually developed by Isuzu, and most probably will be used in the next generation Isuzu Alterra. Does the torque figure sound powerful? Definitely. It produces 120 Nm more torque than the Mitsubishi Montero Sport, but take note. The Chevrolet Trailblazer is a little bit heavier than the Mitsubishi Montero Sport. Power is delivered through a 6-speed automatic (yes, a Six-Speed) with tiptronic shifting, driving either  the 2 rear wheels or all 4 wheels, depending on the selected mode in the 4WD system. I wasn’t able to do a proper test on the 4WD system since there aren’t any challenging terrains around, but it’s electronic design does save cabin space.

Drive the Chevrolet Trailblazer, and the first thing you will notice is how comfortable it is. One thing I like about the Chevrolet Trailblazer is the ride. Sure it still has some of the stiffness of a ladder-frame SUV, but this SUV has the most comfortable ride among the competition. It also has the least amount of road noise, thanks to good sound insulation. Acceleration is decent and the engine does not show any signs of struggling, thanks yet again to VGT (Variable Geometry Turbo). At highway speeds, the revs are kept to a minimum, thanks to the 6th gear. Since the engine does not show any signs of struggling, I was able to achieve an average fuel consumption of *10.5 km/l which includes city, highway and sporty driving. As for agility, it isn’t bad. Steering effort is adequate at low speeds and the handling is predictable.

As with everything in life, nothing is perfect. One thing I have to complain about is the Trailblazer’s third row seat. It does not fold flat and it creates a huge lip. The Mitsubishi Montero Sport’s third row folds flat to the floor, though unlike the Montero Sport, the Trailblazer’s third row seat is much more comfortable. Then there’s the engine. There’s a little bit more engine noise than the competition. The design does create a noticeable blindspot in the rear. As for the handling, well, it’s nothing that you would call sporty, as this SUV is geared towards comfort. There is body roll when travelling fast in the corners and the front pitches forward a bit under moderate braking. The Mitsubishi Montero Sport is a little bit sportier and has sharper brakes. If it’s fun you’re really after, forget the midsize ladder frame SUVs and focus on midsize crossover SUVs such as the Mazda CX-9, Ford Explorer, Kia Sorento and Hyundai Santa Fe.

So, the new Trailblazer. It is an excellent midsize SUV. It is good looking, comfortable, efficient, and spacious. The question is, will I pick this over the Mitsubishi Montero Sport, specifically the GTV? Well, there are a few things in which the Montero is better such as a quieter engine and more technology, but there are also a few things the Chevrolet Trailblazer is better, such as design, comfort, and space. The Trailblazer is more efficient than the Montero (GLS-V) based on my fuel consumption rating in 2WD mode, but not by a huge margin. Only 0.1 km/l better, which I think my driving style might have played a role in it’s fuel consumption. Now, will I pick this over the Montero Sport GTV? I don’t know. Honestly, I’m tied with both SUVs. So I think this does answer the question. Is the Trailblazer better than the competition? Well, most of it. At 1,718,000, it is also great value, and based on how many pre-orders TCCCI received for the Trailblazer, I think pricing is not a problem for consumers.