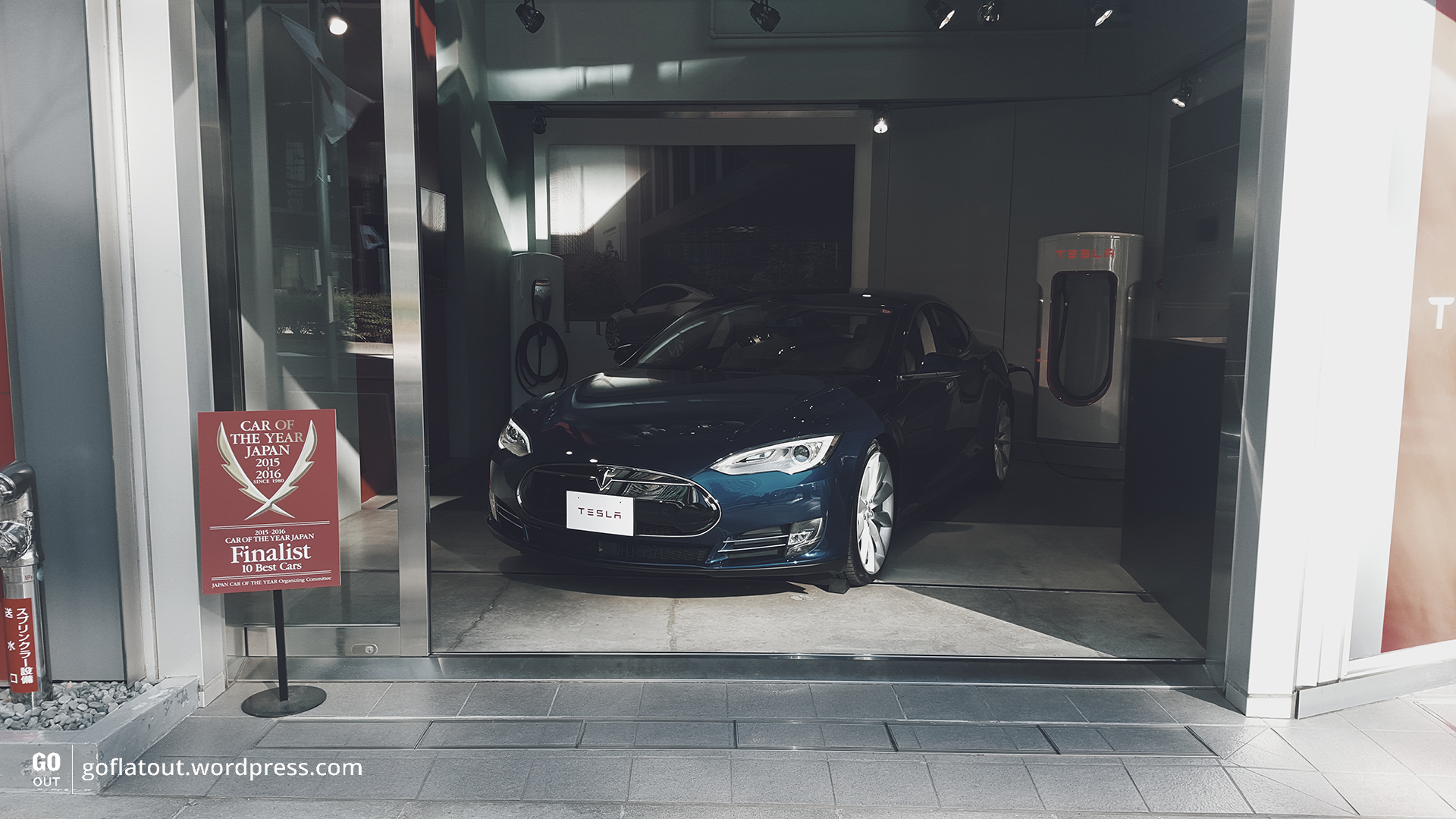 We’re taking this post as an opportunity to announce a new section of Go Flat Out. It’s not hard to ignore our love for Japan. We love its car culture, we love Japanese cars, we love Keiichi Tsuchiya, we love D1 Grand Prix, we love JDM, and we love Japan, period. Therefore, we have decided to create a dedicated section in Go Flat Out all about the new cars, car culture, and whatever it is that’s all about Japan, and we’ve started with our post a couple of months ago about Toyota’s indoor theme park in Odaiba called MEGAWEB.

The Tesla Model S is one of the world’s most favorite cars in recent memory. Every hipster wanted one like how they would love a fucking iPhone, and it impressed a whole lot of people, not just car enthusiasts. It is proof, then, that a car can become a desirable piece of tech first, with the role of being a thrill-seeking mode of transportation second, but the Tesla Model S is not all about the newest trend in Silicon Valley. When properly equipped, it can keep up with supercars in a 0-100 km/h sprint, and because of that, the Tesla Model S, specifically the P90D variant, is the world’s fastest accelerating sedan, and the world’s fastest electric car, and we here at Go Flat Out likes fast cars.

Perhaps the biggest fan of the Tesla Model S would be me. Without the presence of an electric car infrastructure in the Philippines, Tesla will never live to see daylight, though a number of people in the Philippines have imported Teslas for their personal use. I have a thing for Teslas. When I lived under the shadows of doubt of the feasibility of an electric car, this slick looking luxury sedan suddenly came out of nowhere. Like Steve Jobs showing to the world his excellent marketing skills by convincing the world how “revolutionary” the iPhone was, Elon Musk showed the world how revolutionary the Tesla Model S was, and he wasn’t kidding. The biggest issue with an electric car is its range. A single charge will only yield usually around 40 miles of range, which is why “range anxiety” exists in consumers, since these people constantly worry about how much they can travel in a charge. In the Tesla Model S, their anxiety is not as worse, due to the fact that it can travel at around 200-300 miles a charge, depending on configuration. What has Tesla done? Well, it’s not really a revolutionary solution. They just added a huge battery for bigger range, so why haven’t Nissan done that with the Leaf, or BMW with their i3? For starters, Tesla’s batteries can be feasibly large because the car’s chassis itself already stores the battery. Though the Model S is heavy, mounting the batteries together with the chassis itself means that the car’s center of gravity is low, therefore under hard cornering, its 2-tonne weight isn’t actually felt that much. As a matter of fact, combined with the instant torque an electric car is known for, the Tesla Model S is pretty fun to drive. This instant torque is not just for fun, it makes overtaking as easy as pressing a button. The Tesla Model S simply blasts off without drama.

The Tesla Model S is a very high tech car, and it really flaunts it. The door handles are flushed into the body, but when you approach the car, the handles slide out, and when you want to lock the car, you simply push back the door handles upon leaving the car. The inside, too, is a tech fest that even the most tech-savvy people won’t be disappointed. There’s a freakingly huge 18-inch screen that supports multi-touch gestures, and just like your smartphones or tablets, the screen uses capacitive technology, so the touch response is no different than that from your devices. In the touchscreen, interacting with the vehicle is as fun as ever. The animated Tesla Model S in the screen matches your cars color, and when your turn on the lights or turn signals, the animated car does so too. The details are cheeky, and it makes the ownership experience even better. Those who have been in a Mercedes-Benz will notice the steering column mounted gear selector. Want something to show-off to your friends? Tesla’s Autopilot is now available in the Tesla Model S through a software update, and it enables the car to literally drive by itself on the highway.

A wall-mounted charger can be purchased optionally, and with this, the Tesla Model S can be charged fully overnight. With a standard 110-volt socket, the Model S will charge for a painstakingly slow time, so forgot doing that. If you are on your way to Osaka and you are worried that you might run out of juice, there are now a good number of Tesla Superchargers around Japan. These are free, and it enables the car to be charged to 50% in under 3o minutes. How much are the running costs? If your wall-mounted home charger is connected to a solar panel, then you are not just powering your car for free, you are also charging the car through zero-emission power sources. This is green motoring, and combined with Japan’s increasing number of renewable energy plants, the electricity source of the Tesla Model S becomes truly cleaner as ever.

The most interesting out of all the Tesla Model S variants would be these two. The P85D with its “Insane Mode” and the P90D with its “Ludicrous Mode”. With these modes activated, these enable the cars to accelerate from 0-100 km/h in 3.2 seconds and 3.0 seconds, respectively, and we have seen in countless YouTube drag racing videos how a Tesla Model S has beaten numerous high performance cars in a 0-100 km/h sprint. Luckily for me, I had the ride of my life when the nice folks at Tesla Aoyama allowed me to experience the explosive potential of the instant torque only a Tesla Model S can deliver. Alas, I do not have an international driver’s license, so the second best option was for them to take me for a tour around Tokyo in the Model S P85D. What more could I ask for in my stay?

0 comments on “Go Flat Out In Japan: We Take A Look At The Tesla Model S (With Video)”