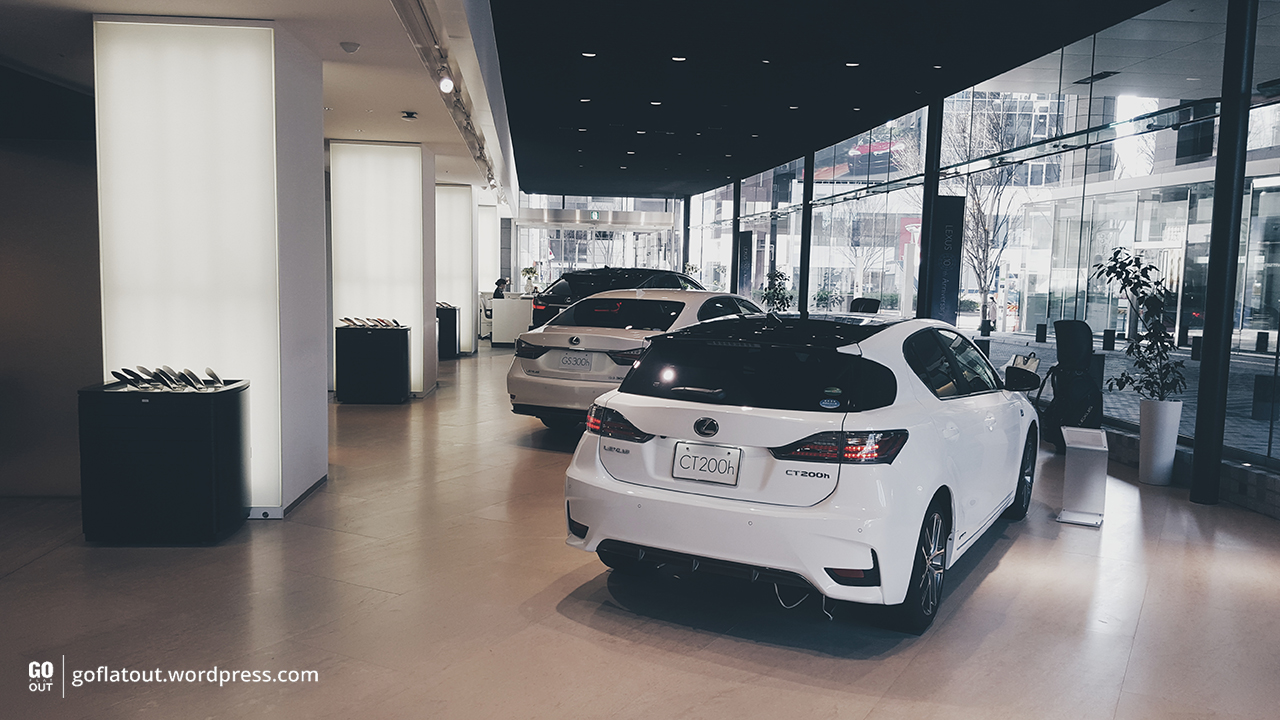 From blunt to grunt. The Lexus brand has evolved from what was once an old man’s glorified Toyota, into something much more serious, perhaps even vulgar. As a fan of the new image of the Lexus brand, I couldn’t resist visiting the Lexus International Gallery in Aoyama, Tokyo, Japan during my winter visit in February. On display were two recently launched cars, both locally and internationally. The facelifted Lexus GS, and the all-new Lexus RX.

From its previous motto “The Pursuit of Perfection”, Lexus now carries the tagline “Amazing In Motion”. Well, we couldn’t blame them for it. The Lexus LFA supercar that was produced from 2010-2012 with a limited run of 500 units, was a revelation not just for Lexus, but for how the world conceived supercars from Japan. While Japan is a country that isn’t short from technological innovation in its cars (just look at the Nissan GT-R), it however, isn’t known for prestige, a clear, bold and striking identity that seems to make European luxury and exotic cars carry a status symbol that Japanese cars usually don’t posses. Things changed when the LFA came, and this became the turning point for Lexus’ direction. Whatever lessons have been learned in the development of the LFA, they promise an injection of luxury, sportiness, and athleticism in every new Lexus after the LFA.

I’ve visited Lexus Manila in Bonifacio Global City multiple times already, and I can’t help but feel cozy and relaxed whenever I am at their dealership. It feels more like a hotel lobby rather than a dealership. It’s a principle that embodies every Lexus dealership around the world, where it is centered towards excellent customer service. It’s not just the dealership that makes up the typical Lexus customer experience. What’s a good dealership without good people, right? The folks of Lexus Manila welcome every guest as if it was part of their family, and that’s something you rarely experience with dealerships nowadays, regardless if it’s in the premium or mainstream segment. Upon entering the Lexus International Gallery in Tokyo, I am surprised by how consistent the principles of Lexus are followed around the world. The Lexus Manila dealership’s ambience is exactly in line with it’s international gallery in Tokyo, and that’s quite a difficult feat to achieve for a company to implement its principles around the world. I mean, just look at some BMW dealerships around the Philippines. Some are pretty nice, and some are pretty trashy. Let’s not even talk about the service bays of some luxury car dealerships. Lexus Manila’s looks miles better compared to the competition, and this is, again, in line with Lexus’ main focus on bringing excellent customer satisfaction that befits only a luxury brand.

Bilingual staffs welcome you to the gallery as if you were, again, part of their family. After chatting with the staff for a few minutes, she invited me to have dinner at Intersect by Lexus. I humbly declined the offer, however, since whenever I visit Japan, I always would prefer eating Japanese rather than western food, which is primarily served in Intersect.

As a Lexus fan myself, I am more than happy to see the Lexus brand evolve to what it is today. I wasn’t a fan of Lexus before, since I view these cars as glorified Toyotas that only a grandfather would appreciate. Now though, you could argue that a Lexus IS has more character and road presence than a BMW 3 Series. Perhaps another trump card the Lexus has that other manufacturers don’t possess is their ability to explore the waters and try other things. From grandpa’s luxury car to a millennial’s bold, fashion statement. Love it or hate it, Lexus has changed its identity, and it’s an identity that I truly love.

All Lexus now carry the brand’s bold, spindle grille. It’s a design identity that is clearly identified as a Lexus, the same way you’d treat the kidney grille as BMW’s, or the single frame large grille as Audi’s. It’s a bold statement that’s sure to catch the eye of a passer by. Driving dynamics have also changed. Whereas Lexus were known for comfortable luxury cars, now they’re more razor sharp. While some cars are still not as competent handling-wise to a BMW in order to not fully alienate its past customers, those Lexus with sporty intentions can compete neck and neck with its German rivals, and this is clearly evident with their F Sport and full-fledged F vehicles.

In 6 years time since the 1st Lexus LFA came out of the production line in Motomachi, Lexus has gone from blunt to grunt. The world is taking notice of Lexus’ newfound character. With Akio Toyoda’s goal of injecting fun to their cars and bringing back Japanese driving passion to its cars, it’s an exciting time to not just be a Lexus fan, but to be a fan of Japanese cars as a whole, and the tides are once again changing, and it begins with this car below. The new Lexus LC. We’re genuinely excited to witness what kind of Amazing In Motion Lexus is cooking us up.

0 comments on “Go Flat Out In Japan: Visiting The Lexus International Gallery in Aoyama, Tokyo (26 Photos)”