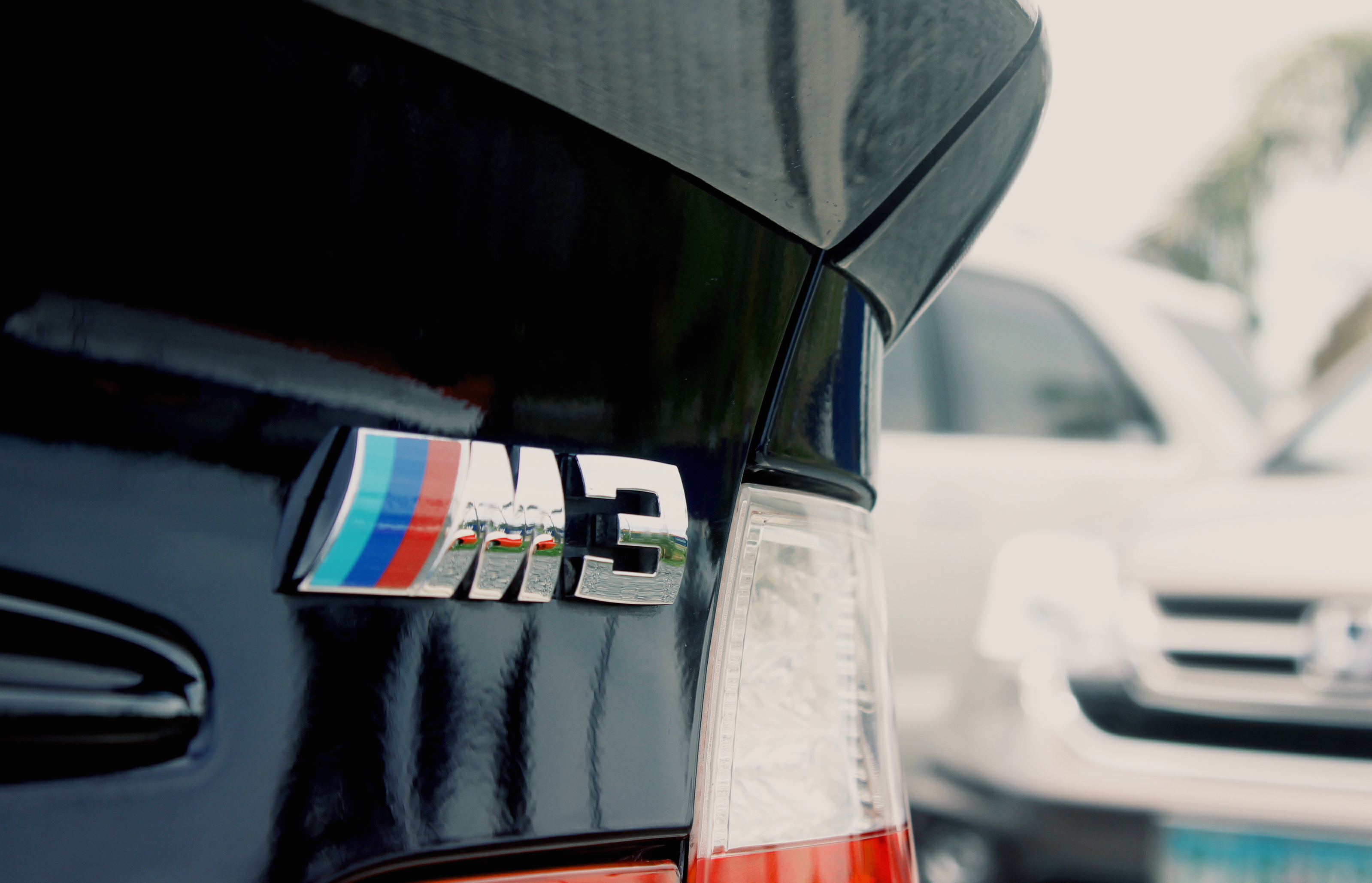 Kicking off the new segment of Go Flat Out called Car Finds, we are dealing today with a performance car from BMW. Here at Car Finds by Go Flat Out, we’re going to appreciate the benefits of depreciation in the second hand luxury and sports car market. Performance cars can be pretty expensive, even in the second hand market, and therefore, we try and search for what is the best for a certain budget. Thanks to depreciation, a 4 year old BMW becomes the price of a brand new Toyota Corolla Altis in the Philippines, and let’s face it, a 4 year old BMW is still a more authoritative machine than a brand new econobox. For today’s case, what is the best second hand BMW M you can buy for less than P2 Million.

Today, we have the legendary BMW M3 Coupe E46 generation, and a very low mileage BMW M3 at that. You may not be able to tell, but this is the facelifted BMW M3 E46. Externally, as with most BMW Ms, only a few bits are changed from the exterior. The facelift adds LED tail lights, and the interior is revised, now incorporating a touch screen infotainment system. The E46 generation is one of BMW’s best designed cars of all time, and till this day, the car looks legendary, having aged well over its lifetime. What makes this M3 E46 special? First is its engine. All of BMW’s engines are excellent, especially in terms of driving enjoyment. The M3 E46 is the last M series vehicle to have a naturally aspirated inline-6, delivering a soundtrack unlike any other. Because it is naturally aspirated, it even sounds better than the current inline-6 turbocharged engine of the F80 BMW M3 and F82/83 (Coupe/Convertible) M4, especially since the new M3 and M4 are notorious for having a device that pumps synthetic engine sound inside the cabin. While it generally sound good from the outside, listening to the engine from the inside seems a bit of a cheat isn’t it?

Processed with VSCOcam with g3 preset

The BMW M3’s exterior is timeless. Even after so many years, the E46 remains to be a icon, especially since the E46 M3 was only available as a coupe or convertible. The double kidney grille, twin eyed HID headlamps, and L-shaped LED tail lights are all typical BMW design touches. The folks of Go Flat Out are huge fans of the E46’s design, most of us desire to own a second hand 3 Series E46 sometime in the future. It’s a shape that, while it is conservative, the overall shape is handsome and aggressive, especially with its flared wheel arches. This particular unit is graced with _ rims and a _ carbon fiber lip spoiler. Modifications for the BMW M3 are best left subtle, so as not to overly ruin the iconic look of the car.

In typical BMW fashion, the BMW M3’s interior is angled towards the driver. It is only at Chris Bangle’s era when the dashboards of BMWs weren’t angled towards the driver. Like the exterior, the interior shares a lot with the standard BMW 3 Series. Only subtle M3 badging, M doorsills, M gearshift lever, and of course, the switch to adjust how fast the 6-Speed SMG transmission changes gears, are your only reminders that this is no ordinary BMW 3 Series. Standard in this car is a touch screen infotainment system that is user friendly and intuitive to use, a far cry from the time when BMW’s first iteration of the iDrive came out in the E65/66 (Standard/Long Wheelbase) BMW 7 Series in 2002. The seats and other trimmings are upholstered in leather, and there are power seat adjustments as well.

Of course, when we’re talking about coupes, practicality isn’t exactly high on your priorities. However, you’d be glad to know that at least small adults can fit in the back of the BMW M3. Being a 2 + 2 seater, the seats in the back can only accommodate 2 people.

The are a decent amount of storage inside the BMW M3, with two cupholders at the front, decent sized door bins, and a glovebox to store your every bits and bobs. The trunk space is good too, with a usable 410 liters of space, which is even bigger than some compact sedans, and when you need to haul longer stuff, the rear seats fold down in a 60:40 split fashion.

Being a luxury car, the BMW M3 E46 has plenty of gadgets to play around, at least when it was released in the early 2000s. The BMW M3 E46 features Bluetooth connectivity, a touchscreen infotainment system with voice command, automatic climate control, and a CD player. Safety kit includes airbags, ABS with EBD, Dymamic Stability Control, Sport Mode, and Seat Heaters.

The BMW M3 is one of the first cars to have drive by wire, and what this means is that, since this BMW M3 has Sport Mode, the electronics in the car can adjust the throttle response to suit the driver’s desired driving mode. The gauges, upon start up, have orange lights at the top of the RPM range, but progressively disappears once the engine reaches its optimum temperature, and once it does, all hell breaks loose.

The magic of BMW M is that, there’s no clear external indication of its capabilities. A wolf in sheep’s clothing, as they say. The cabin layout is relaxed, with an absence of lunacy, but turn the traction control off, and you can certainly play along with the BMW M3. With a Limited Slip Differential, the BMW M3 still grips beautifully even without the Dynamic Stability Control on, but as my friend here loves to bring out the lunacy in cars such as this, we were more than happy to oblige. The steering is pin point accurate, every input of the driver is well obeyed by the car, and the tiller provides plenty of feedback to the wheels, letting you feel connected with the wheels on the tarmac. The chassis rigidity is excellent, and combined with the near perfect 50-50 weight distribution BMWs are known for, the BMW M3 is truly one of the best handling cars ever. Once things get a little too fast for you, powerful brakes are there to slow you down, being able to stop from 100 km/h to 0 in 2.4 seconds.

If you desire to use it as an everyday car, the BMW M3 happily obliges. The magic of BMW Ms are that, from its transition as a BMW 3 Series Coupe to an M3, practicality hasn’t been entirely compromised. You have 2 seats in the back that can at least fit small adults. You have a boot that is big for things, and there’s a couple of cupholders up front. It even has automatic climate control. Everything works beautifully and conspicuously, like an everyday car. It is a proper car that you can even take your wife to the grocery shops, and use that generous 410 liters of space, yet have more reasons to simply take the BMW M3 out for a drive. The suspension is tuned for sport, with a ride that is generally firm that can send shocks down to your spine, but with an interior that is a relaxing place to be, it’s a small compromise to pay for such a capable machine, and that’s the beauty of the BMW M3. It can be a track car, yet is practical and sensible for everyday use.

Unlike the usual downsides where we talk about the negatives points directly toward the car, in this type of review, we’re going to talk about the possible downsides when owning a second hand performance or luxury car. As with all BMWs, make sure that you have the budget to maintain this vehicle, but we reckon you do if you’re budget for a second hand car is way above P1 Million. Be wary of electronics as well, as they may have a tendency to fail after all these years. Being a performance car, the BMW M3 doesn’t really have the best fuel consumption of any car, but if you’re planning to buy an M3, fuel consumption isn’t obviously high on your priorities. Because this M3 has low profile tires, be wary when driving this car over potholes.

The BMW M3 is a truly legendary car, with the handling that is unmistakably one of the best in any car, and combined with its practicality, the BMW M3 is one of the excellent products from the skunkworks of BMW M, combining practicality, luxury, and performance in one excellent and timeless package. Further making this particular BMW M3 an excellent deal is that, it has only done 43,000 kilometers, which is very low for a car its age, especially considering how far second hand cars generally travel in such a long period of time.

0 comments on “Car Finds: What Is The Best Second Hand BMW M Vehicle Under 2 Million Pesos”