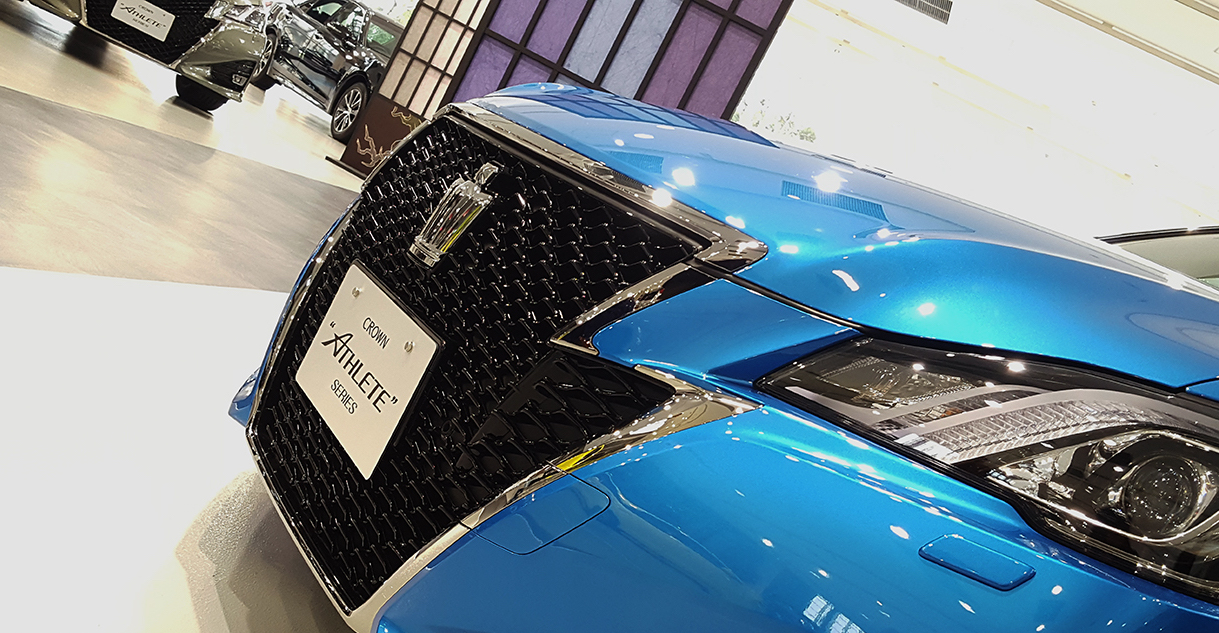 There are people here in Go Flat Out that love the Toyota Crown, and one of them is me. As such, I am very happy to be able to have an up close and personal look at the 2016 version of this legendary Toyota luxury sedan.

Celebrating seven decades of the Toyota Crown, Toyota launched the facelifted 2016 Toyota Crown in October, 2015, bringing in an updated look for the Royal and Athlete series, while the Majesta’s updates are minimal.

The Crown Athlete receives the most updates out of the three versions. The grille receives a new mesh pattern, and the grille now extends fully down the bottom of the car’s front end. All models of the Crown now feature Bi-LED headlamps with LED positioning lights that can also act as daytime running lights.

The Toyota Crown Royal is the more dignified option for the Toyota Crown. Instead of a sporty exterior design, sport tuned suspension, and more aggressive interior, the Royal has a plusher ride, and a brighter interior color scheme. The grille is different, too, having a more dignified silver design instead of the mesh pattern found in the Crown Athlete. The Crown Royal gains a new set of LED tail lights, and the grille has been lowered, and now features a chrome finish surrounding the grille and extending towards the fog lights.

Inside, the wood panelling now features a patterned design embedded into the woodgrain, and the interior is done in a two tone cream and black color scheme.

Powertrain choices for the Crown Royal are the same as the Athlete’s, but the 3.5 liter V6 and 2.0 liter turbo options are opted out of the choices.

The Crown Majesta serves as the flagship of the Crown line-up. It differs from the Crown Athlete and Royal by offering a wheelbase that has been stretched by about 3 inches, which is dedicated for the rear passengers.

Exterior and interior changes are very minimal. Powertrain choices remain unchanged as well for the Majesta, still the same 2.5 liter 2AR-FSE hybrid system, and unique to the Majesta in the Crown line-up, the 3.5 liter V6 hybrid system found in the Lexus GS 450h.

The biggest update to the entire Crown line-up is perhaps Toyota’s debut of the world’s first driver assist function that utilizes ITS (Intelligent Transport Systems). Toyota ITS Connect uses Japan’s standardized ITS frequency of 760 MHz, which enables vehicle-to-vehicle (V2V) communications, vehicle-to-infrastructure (V2I) communications. ITS has the capability to identify vehicle positions in advance in situations such as crossing an intersection, wherein the ITS system can immediately warn the driver if there is another vehicle crossing into the intersection as well, preventing a collision. The possibilities of ITS is not just limited to a car’s safety, as ITS also communicates with infrastructure, therefore a driver may be able to know in advance if the next stoplight will turn green or red.

Further highlighting Toyota’s dedication to the Crown line-up, Toyota wants the Crown to be a luxury car exclusive to Japan. The Crown, for seven decades, has been one of Japan’s prime automotive symbols. Some may argue that the Nissan GT-R serves as Japan’s icon, but for decades past, it has always been the Crown that has identified Japan’s automotive prowess. The Crown has been able to deliver luxury and unmatched reliability that only a Crown can deliver, and as such, for the past decades, the Crown has been a highly desirable car from car enthusiasts all over the world. This exhibit in the Toyota MEGAWEB further emphasizes that the Crown is a genuinely Japanese luxury sedan, born and bred by the Japanese, for Japan, and this is why, Toyota wants to keep the Crown a car exclusive to the Japanese market. I guess it’s about time I have acquired an international license in order to drive the Toyota Crown, then.

0 comments on “Go Flat Out In Japan: A Detailed First Look At The Updated 2016 Toyota Crown”