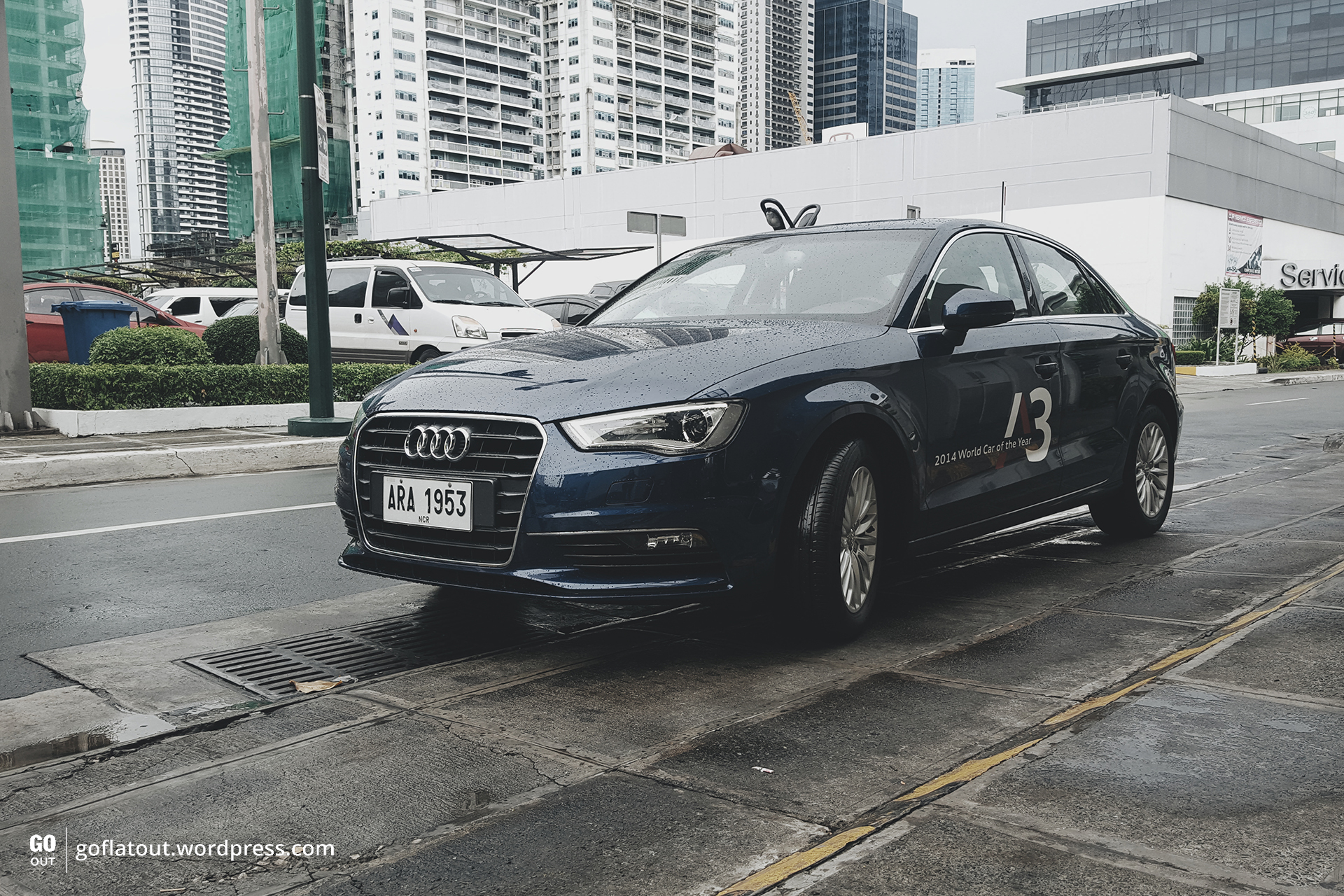 If you’re a keen observer, you’ll probably notice that in almost every new car that comes out, they promise bigger room and more space, but as a consequence, their exterior dimensions also increase. The Audi A4 has always been Audi’s entry level sedan, but this all changed when the A3, which was once available only as a hatchback, came in a sedan form in 2014. In the USA, and perhaps even in the Philippines, we prefer sedans over hatchbacks, with the reason being that sedans have a slightly more authoritative and grown up presence than hatchbacks, and that added length gives it an impression of being a bigger car than its equivalent hatchbacks. Does having a 2014 World Car of the Year-winning smaller compact sedan slotting below the A4 make sense for Audi? We’re here to find out.

As you already know by now, the Audi A3 Sedan has won the 2014 World Car of the Year award, narrowly edging ahead of the Mazda 3. Was it a winner because of its looks? Well, you’d be forgiven for mistaking the A3 sedan for its slightly bigger brother, the A4. Audi’s photocopying machine has done its wonders to this car though. It’s a simple yet sufficiently sporty and elegant looking piece of engineering, and while it may not seem as interesting as Lexus’ recent designs, it’s sure to age well in the years to come. It’s a cool design that seems to perfectly fit young affluent professionals, and I like cars with this kind of youthful presence. The front is of course, ever so highlighted by Audi’s trademark single frame grille, which are complemented by a pair of Bi-Xenon HID headlamps, and in traditional Audi fashion, come with LED daytime running lights as standard across the range. Slick alloy wheels come as standard across all variants, but of course if you desire to add more style, you can change the standard alloy wheels from a wide range of other available rim designs, at an added cost, of course. At the back, LED tail lights come as standard, including the license plate lights, and I particularly am attracted to this A3’s blue paint.

Whereas the exterior designs of Audis seem to be a result of their photocopying machines, their interiors are a completely different story. Each model in the range has a unique interior, and whichever Audi you go for, in my opinion, you are treated to the best interiors in the segment. I find Audi’s interior more sumptuous than any of its competitors, with top notch materials all over the cabin. The buttons have that trademark reassuring click when being pressed down, and it’s the same case when turning the dials and the rotary controller for the MMI (Multi Media Interface) infotainment system. The whole cabin is solidly built with a reassuring thud on the doors, and there are no squeaks or rattles when driven even to the harshest of road conditions.

Launched primarily as a sedan in the Philippines, this generation of the A3 is the first time in the Philippines that it is not being offered as a hatchback, and based on the sales of the A3 Sportback (their marketing term for their 5-door hatchback version), not a lot of people will miss the old folk. The A3 sedan is still thankfully as flexible as the hatchback. 60-40 split folding rear seats come as standard, and with that added flexibility, carrying long items won’t be a problem. The A3 sedan is also dotted with plenty of storage places around the cabin. Large bottles easily fit in the door bins, and the glove box is decently sized.

The trunk is pretty generous for its size. It has a nice square shape, which means the spaces in the side become intelligent spaces to store loose items that would otherwise scatter across the trunk as you drive along. Unlike the hatchback though, the A3 sedan suffers from a smaller opening, but it’s a sedan, so this won’t be an issue for most people.

This Audi A3 Attraction will be the pick of the range, as it offers sufficient levels of equipment for the price. This Audi A3 comes as standard with automatic Bi-Xenon HID headlamps with LED daytime running lights, Audi’s excellent MMI infotainment system, leather seats, rain sensing wipers, ABS with EBD, stability control, a plethora of airbags, ISOFIX child seat points, and 4-way power driver’s seat with power lumbar support for both driver and front passenger seats.

Audi’s MMI is easy to use than ever. In traditional German fashion, the system is controlled by a giant swivel wheel, in which the large wheel also acts as a touchpad for handwriting recognition when let’s say, writing down a number to call someone.

The Audi A3 is powered by the now rather infamous 2.0 TDI diesel engine, which is a diesel engine used in many other Volkswagen Group vehicles. This 2.0 TDI diesel engine is one quiet and refined motor that sound refined, even under hard acceleration. It’s a powerful motor at 148 hp form 3500 to 4000 rpm, but an even torquier one with a meaty 320 Nm of torque available from as early as 1750, all the way to 3000 rpm. This enables the car to sprint from 0-100 kph in 7.8 seconds through the Volkswagen Group’s slick 6-Speed S-Tronic Dual Clutch Automatic Transmission.

Twisting the ignition key (sorry guys, the A3 Sedan does not come as standard with smart entry and push button start) brings, well, not much, inside the cabin. Not a vibration or a rattle comes from the diesel engine as it breathes to life. Dieselgate aside, the whole Volkswagen Group makes the best diesel engines in my opinion. Power delivery is very linear and straightforward. It doesn’t set your pants on fire, nor does it bore you to death. It builds up speed quickly in a relaxed pace that is not found in your typical diesel engines, and with 320 Nm of torque at your disposal, overtaking will be the least of your concerns. Those occasional stoplight drag races should put those ricey cars to shame with your humble looking Audi A3 sedan.

The Audi A3 has been primarily built for sporty driving in mind. Thankfully, here in the Philippines, the softer suspension set up is offered as standard. Potholes and bumps are absorbed really well. If you ever desire a sportier set-up, the S Line package can be selected, which adds a sportier exterior and interior design, bigger wheels, and a stiffer suspension set-up. Be ready to live the compromises, though, of having a firmer suspension set-up. To be honest, the standard suspension set-up is already adequate enough in terms of its sporty handling characteristic, and the only time you’ll desire for a firmer suspension is if you’re out on a racetrack, but let’s be honest, you’re rarely (or even never) going to be on a racetrack, are you? Combined with the steering that is light at low speeds and weights up at higher speeds, the Audi A3 offers a great compromise between comfort and sport, though the steering offers little in terms of actual feel and feedback from what the front tires are doing. A BMW 1 Series, or the bigger 3 Series sedan offers more in terms of true driving pleasure.

At higher speeds, the Audi A3 remains very stable and very solid, with little of wind and tire roar to worry about. Along with the slick 6-Speed S-Tronic Dual Clutch Automatic that offers very quick shifts at higher speeds, which is further made enjoyable with the use of paddle shifters, which can also bring added fun when tackling corners through a mountain pass. Admittedly, it’s not the smoothest off the line, but once it gets going as you speed through the expressway, the S-Tronic gearbox immediately becomes your best friend, both for relaxed and sporty driving.

Being a diesel engine has its benefits in fuel consumption, and in our drive in the city, we’ve achieved a very frugal 14-16 km/l and that’s without even exerting any effort and being conscious about the gas pedal. As I am told by an Audi test driver accompanying me, in the recently concluded fuel economy run by the Department of Energy, this Audi A3 2.0 TDI was able to achieve 28 km/l without even making an effort. The benefits of having a diesel engine is very clear here. Combined with the relatively competitive maintenance costs, as German cars are only serviced once a year, amounting to around P30,000, the Audi A3 2.0 TDI is a relatively affordable car to run.

Unfortunately for you, Mr. World Car of the Year, you still can’t hide your imperfections, because nothing in this world is perfect, isn’t it, but as one song says, “Love your curves and all your edges, all your perfect imperfections”. The back seats aren’t particularly great for carrying three full size adults. As the A3 comes with Audi’s quattro AWD as an option, there’s a transmission tunnel that eats up legroom for the middle passenger. Meanwhile, on the outer seats, legroom for my 172 cm. height is more than enough, but due to that sloping roofline that the A3 Sportback obviously does not suffer with, headroom is pretty limited, so people taller than me will probably hate you for letting them sit there on hours’ end. The equivalently-sized Mercedes-Benz CLA offers better headroom, but is quite expensive, and the interior is not as premium as the A3’s.

Does it make sense for Audi to introduce a sedan smaller than the A4? Yes, it actually does. With every new car growing in size whenever a new generation is released, it becomes inevitable for a company to release a more compact offering when its compact offering almost borders the midsize category nowadays, but perhaps the better solution for me is, why not keep compact cars in the compact category? Because what’s the point of creating the A8 in the first place if the A6 borders to being a full-size sedan, and an A6 if the A4 already borders to being midsize sedan? For now though, we’re dealing with the present, and right now, having an A3 Sedan makes sense, and it can appropriately serve as Audi’s entry level sedan, which looks and feels perfect for young, affluent professionals who deserve a premium sedan in their youthful lives. Why was the Audi A3 Sedan crowned the World Car of the Year? The award looks for what car is as close to being perfect, and the Audi A3 is one of those few cars with the least number of flaws, as it combines a fun and sporty to drive nature in a well designed exterior and interior. It is able to accomplish many tasks in one well engineered car, and it does so with finesse.