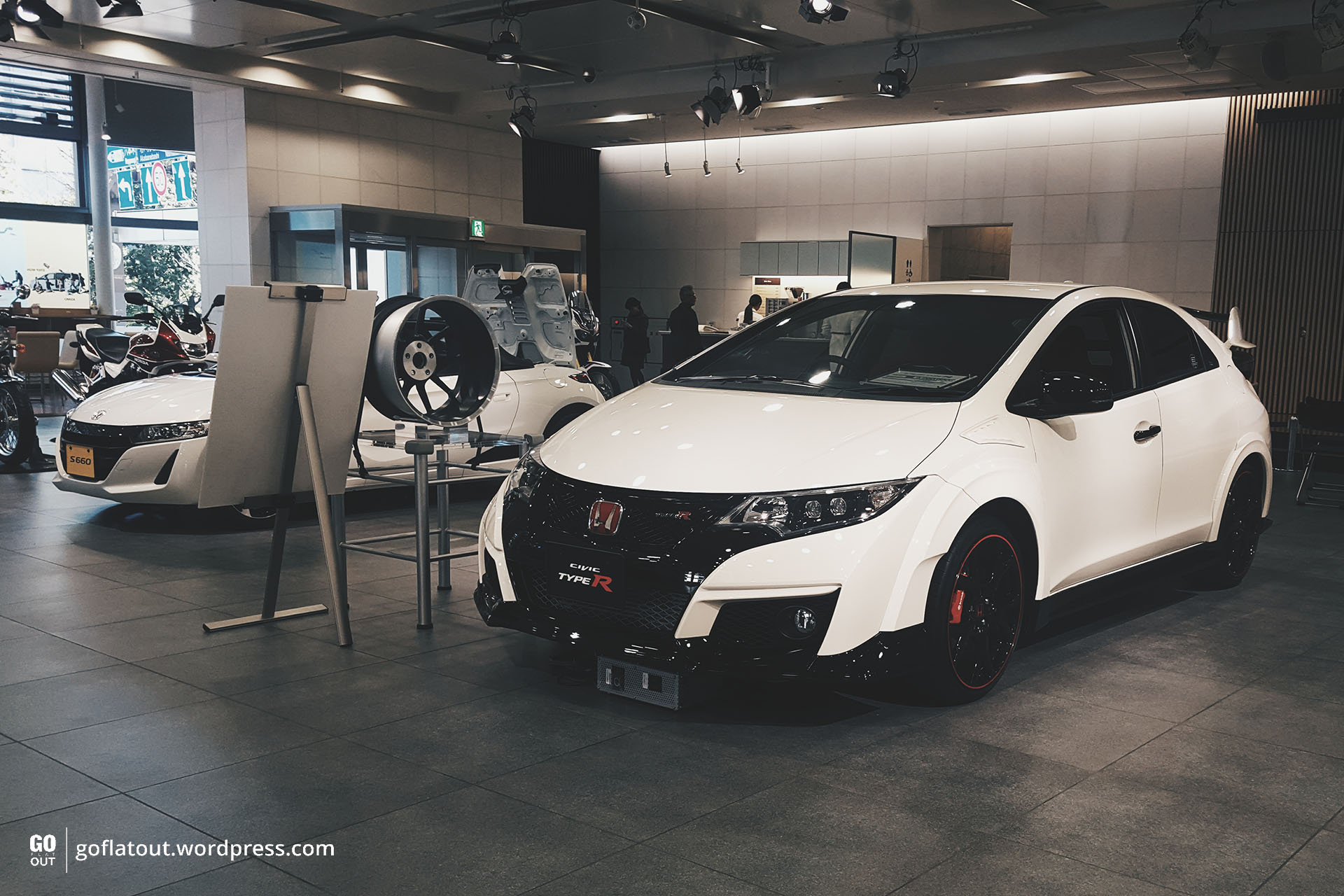 Honda Welcome Plaza is located in Aoyama, Minato, Tokyo. The nearest train station is Tokyo Metro (TOEI)’s Aoyama-Itchome station, and Honda Welcome Plaza is just above the station. Three lines pass through Aoyama-Itchome station. The Ginza Line, Ōedo Line, and Hanzōmon Line. If you are coming from Shibuya Station, take the Ginza Line, and if you are coming from Daimon Station, take the Ōedo Line. Another point of interest is the Lexus International Gallery, which is near Gaien-Mae Station, and a few walks from the Honda Welcome Plaza is Tesla Aoyama, which is midway through your walk towards Lexus International Gallery.

Prior to Honda’s current situation, the brand has been lackluster in terms of fun to drive and high performance cars. With the death of the legenday S2000 in 2009, it was the final nail to the coffin of Honda’s fun to drive and smile inducing petrolhead days. Since then, Honda churned out cars that were catered more towards eco-friendliness. The CR-Z hybrid “sports” coupe was a failed attempt at bringing back Honda’s fun to drive image. While it is a good looking hatchback, it was never as fun as the small Honda CR-X it was supposed to spiritually succeed, mainly due to the slow yet not so fuel efficient hybrid powertrain, especially when you consider its European rivals with punchier yet more frugal diesel engines. The global recession didn’t help either. According to Takanobu Ito, the recession was the reason why Honda didn’t make a huge effort in developing the ninth generation of the Honda Civic, and this iteration of the Civic failed to capture the Civic magic that was known to driving enthusiasts around the world. Well, things have changed at the offices of Honda. These are exciting times for a Honda fan such as me. It seems Honda’s got its mojo back, without forgetting about looking towards the future and building environmentally-friendly machines. We’ve got the all-new Honda NSX, which is now an overly-complicated hybrid supercar, the all-new, aggressively designed tenth generation Honda Civic, the JDM-exclusive Honda S660 small sportscar, and the Honda Civic Type R, which is based on the European version of the ninth generation Honda Civic.

Upon getting off Aoyama-Itchome station, Honda’s kei cars (the term in Japan for tiny cars with a maximum engine size of 660 cc (0.66 liters), and a maximum length, width, and height, of 3.4, 1.48, and 2 meters, respectively) were on display. Kei cars are spacious inside, and believe it or not, my 172 cm frame fits comfortable inside. This is due to the bento box kind of packaging the Japanese engineers are known for, and just like bento boxes, the panels of kei cars are pretty thin, and this is why kei cars will never be sold in other countries, due to the safety requirements these countries demand. In Japan, kei cars have a different safety standard compared to bigger cars.

The facade also held the local debut of the hybrid version of the Japanese Honda Odyssey (the Honda Odyssey in the US market is completely different from what is sold in Asia). The Honda Jazz (Fit), City (Grace), and Shuttle (the Fit’s wagon version) were also on display, and I’ve been a huge fan of the Honda Shuttle, because of its quirky design.

In case you are wondering, the Honda Civic is not anymore sold in Japan, citing dwindling compact sedan sales as the main reason. Basically, if you want a Honda Civic in Japan, this is all you’ve got. Being the European version of the Civic, all Civic Type Rs are made in Swindon, UK.

The world’s most powerful front-wheel drive car, it’s powered by a 2.0 liter Earth Dreams VTEC Turbo engine, producing 306 hp @ 6500 rpm, and 400 Nm of torque @ 2500 rpm. Unusual specs? It’s because of the turbocharging and direct injection, which enabled the VTEC engine to have its peak torque available in a substantially lower RPM range compared to past naturally aspirated VTEC engines which had their peak horsepower and torque at very high RPM ranges.

All the power is sent through the front wheels via a 6-speed manual transmission, the only available and the only proper transmission for a hot hatch. This enables the Civic Type R to sprint from 0-100 km/h in only 5.7 seconds, and have a top speed of 166 mph. It is also now the world’s fastest front-wheel drive car to lap the Nurburgring, achieving the feat in 7 minutes, 50.63 seconds, which is faster than many supercars made in the early 2000s. The Honda Civic Type R, while it may not sing as well as the Type Rs of the past with a naturally aspirated, high revving VTEC engine, the punchier nature of the engine with peak horsepower and torque available already in the lower rev range is a welcome change. The turbos and direct injection are the new norm in high performance motoring that we should welcome, whether we like it or not, due to more stringent emission standards around the world.

Though the pictures don’t do the S660’s size justice, the Honda S660 is actually a pretty tiny sportscar, a kei sportscar to be exact. As we have discussed above, the maximum engine size for a kei car is 660 cc, and like the S2000, which has 2000 cc of displacement, the S660 has 660 cc of displacement.

An Earth Dreams VTC Turbo (no, seriously, it’s VTC because the engine does not have electronic lift control) powers the S660, producing 63 hp @ 6,000 rpm and 104 Nm of torque at 2,600 rpm, good for 0-100 km/h in 11 seconds, but due to the turbo nature of the electric motor, the engine feels punchier than the numbers suggest. The Honda S660 is the perfect representation of Honda’s past, which was known for affordable, nicely styled, and fun to drive cars.

While its dimensions are tiny, the cockpit is actually surprisingly well spaced. I’m 172 centimeters tall, and I’m not exactly the slimmest of people, yet I feel comfortable inside this tiny sportcar. The ergonomics are spot on. The gear lever, handbrake, steering, and pedals are nicely spaced, and they’re even well positioned for heel and toeing. I sure hope I get to drive in the mountains of Japan soon when I come back to this great nation.

Gone are the days of the screaming naturally aspirated VTEC engines of the past, but this is the reality we have to deal with if we want to live on this planet and survive as a species. Turbocharged VTEC engines will be the norm in our petrolhead desires, and even sooner, this will become hybrids, and eventually, full electric or full hydrogen vehicles, as already previewed by the Honda Clarity FCEV. Welcome back, Honda. We’ve missed your crazy engineering practices, and we happily welcome you back with open arms. The all-new Civic is a great step forward, and it’s a Civic that I will soon acquire, thanks to its great styling, 1.5 liter VTEC turbo engine, and innovative technologies. The future is bright for Greenpeace, and it’s bright for the petrolheads out there. We wish we could have the opportunity to have the Civic Type R in the Philippines, though.

0 comments on “Go Flat Out In Japan: Checking Out The All-New Honda Civic Type R and Honda S660 at the Honda Welcome Plaza Aoyama (28 Photos)”