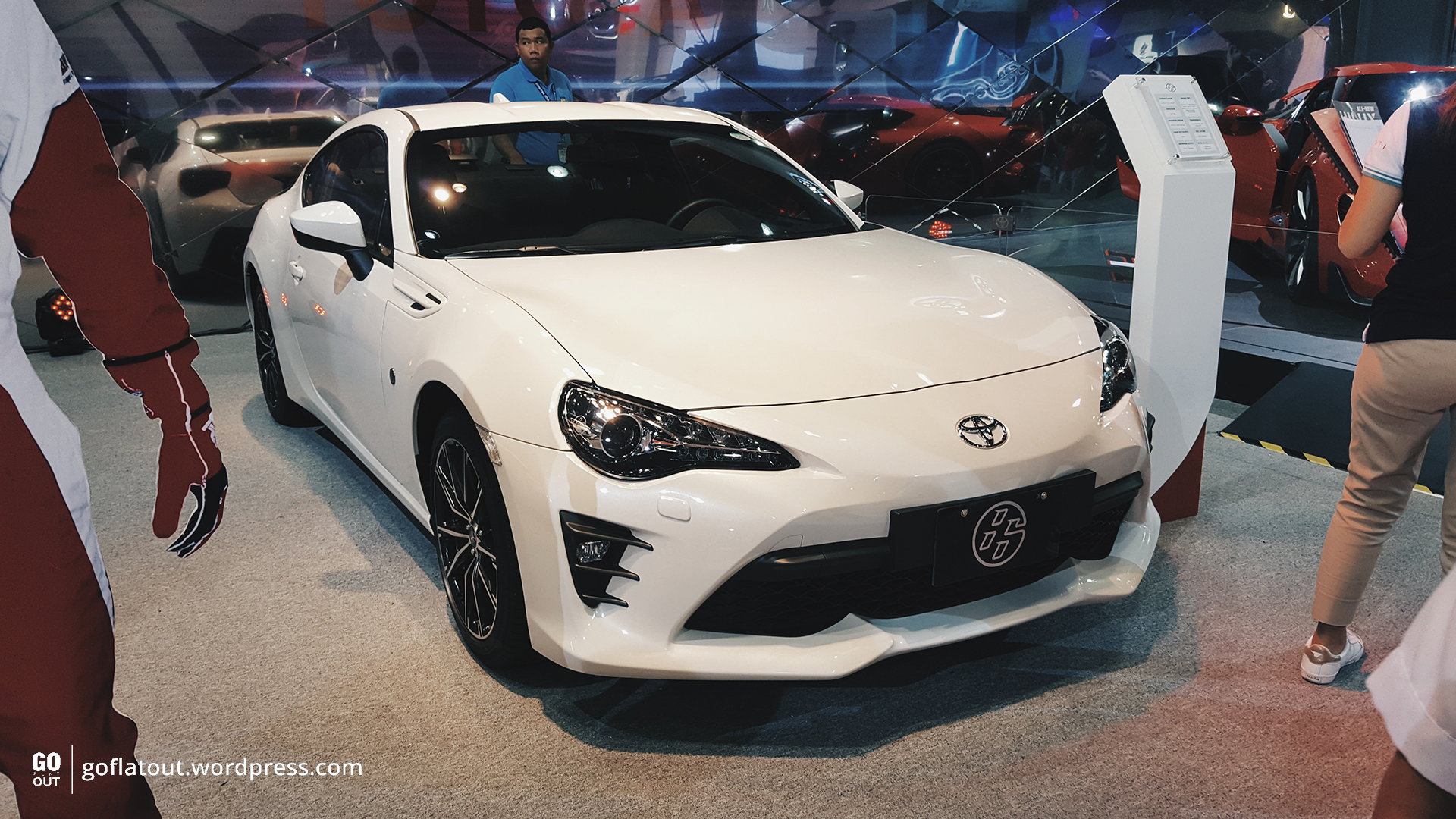 Toyota’s booth is very exciting for this year, as it shows three new cars that have been redesigned for better driving dynamics, or ups the ante further in driving excitement. First up is the 2017 Toyota 86.

The Toyota 86 has been a godsend to driving enthusiasts 4 years since it was launched. The affordable sportscar, like the Mazda MX-5, has become the epitome of driving fun, proving that you don’t need a lot of horsepower to make a fun car. Naturally, as a car goes through its life cycle, it goes through a facelift to keep it competitive.

The Toyota 86 receives a revised fascia, which has been revised for better aerodynamics in mind. The grille opening has been expanded, and the nose lowered. Canards have been added to the design mix as well, and combined together, form a more aggressive look, but more importantly, makes the 86 perform better aerodynamically. Additionally, it is feeding the engine more air. Full LED headlights with LED daytime running lights, LED turn signals, and LED foglights give the 86 a very sophisticated look both during the day and night, while 17 inch alloy wheels in a two-tone finish (the Japanese seems to love doing these things I just noticed), and revised LED tail lights round up the changes done to the 86.

Inside, the driver-centric cockpit receives a new multi-function steering wheel (it used to have no buttons), and at 362 mm in diameter, it is the smallest steering wheel ever fitted to a Toyota, further emphasizing its nimble handling credentials. The gauge cluster has also been revised, now incorporating a color TFT LCD display that shows a multitude of information, including a new G-meter, to tell you how much motion sickness you are bringing to your passenger. The interior materials have also been updated, addressing complaints of the 86 having cheap feeling interior materials. While we know that a sportscar should be entertaining to drive, it is still a good thing for Toyota to replace its old shool Fujitsu 2-DIN stereo that is often made fun of, now replaced by a more sophisticated 2-DIN Kenwood touch screen infotainment system with CD/DVD/Bluetooth/USB and smartphone mirroring via Wi-Fi.

The 2.0 liter direct and port injected (D-4S) boxer engine is still producing the same figures, 200 hp and 205 Nm of torque, but it has been revised to have a better torque delivery. As ever, it is mated to a proper 6-Speed Manual or Automatic transmission to those who prefer to have a robot do the shifting for them, though paddle shifters are equipped.

Improving the handling of the 86 further are a revised suspension, and an increase in spot welds to the body, increasing chassis rigidity, which adds stability to the 86’s handling.

There is only one variant in two transmission options, making life simpler to 86 customers. The manual is priced at P1,749,000, and the automatic adds P100,000 to the SRP.

In addition to the 86, the all-new Toyota Prius has also been previewed, and is expected to finally be launched within the year. In a bid to turn its boring image more exciting, the Toyota Prius has been redesigned to have a striking appearance. As we have first seen at Toyota MEGAWEB in Tokyo, the Prius certainly looks better in the flesh than in photos.

Breaking the stereotype are design cues that are inspired from the Mirai hydrogen fuel cell car. The “dolphin roof”, so they say, is the biggest inspiration from the said fuel cell vehicle. Chiseled lines all around the car make for an aggressive, if not overly styled appearance. The tail lights look particularly interesting.

Build quality overall is excellent, and the materials used now are top notch. Soft touch padded materials have been predominantly used in the cabin, but in the lower parts of the cabin, the plastics still feel low rent and cheap. The overall interior design feels like a spaceship. It has weird shapes and floating effects here and there, and there’s even this weird white porcelain effect thing that looks like a toilet bowl, which is something makes the cabin more interesting, but not exactly sure if it makes it look good. As before, the new Prius will really let its occupants know you are driving a hybrid, with all these futuristic digital gauges on the top of the dashboard, and other gadgets scattered across the cabin.

The all-new Prius is still powered by a 1.8 liter petrol engine, but it has now been overhauled to have 40% better thermal efficiency, which means that the fuel being pumped into the engine is actually used to produce power, and not wasted through heat. Simply increasing an engine’s thermal efficiency can already do wonders to a car’s fuel efficiency, and thermal efficiency has always been man’s greatest challenge when developing a combustion engine. On its own, the engine produces 95 horsepower.

In the pursuit of making the Prius a more fun car to drive, the torsion beam rear suspension has now been replaced by a more sophisticated double wishbone rear suspension. This should make the Prius have better handling capabilities and a better ride compared to its predecessor. There is no pricing for the Toyota Prius as of the moment, and is expected to be announced once delivery dates draw nearer.

In addition to the 2017 Toyota 86 and all-new Prius, Toyota Motor Philippine Corporation showcased to the Filipinos the FT-1 concept, which is a preview to the upcoming Toyota Supra successor.