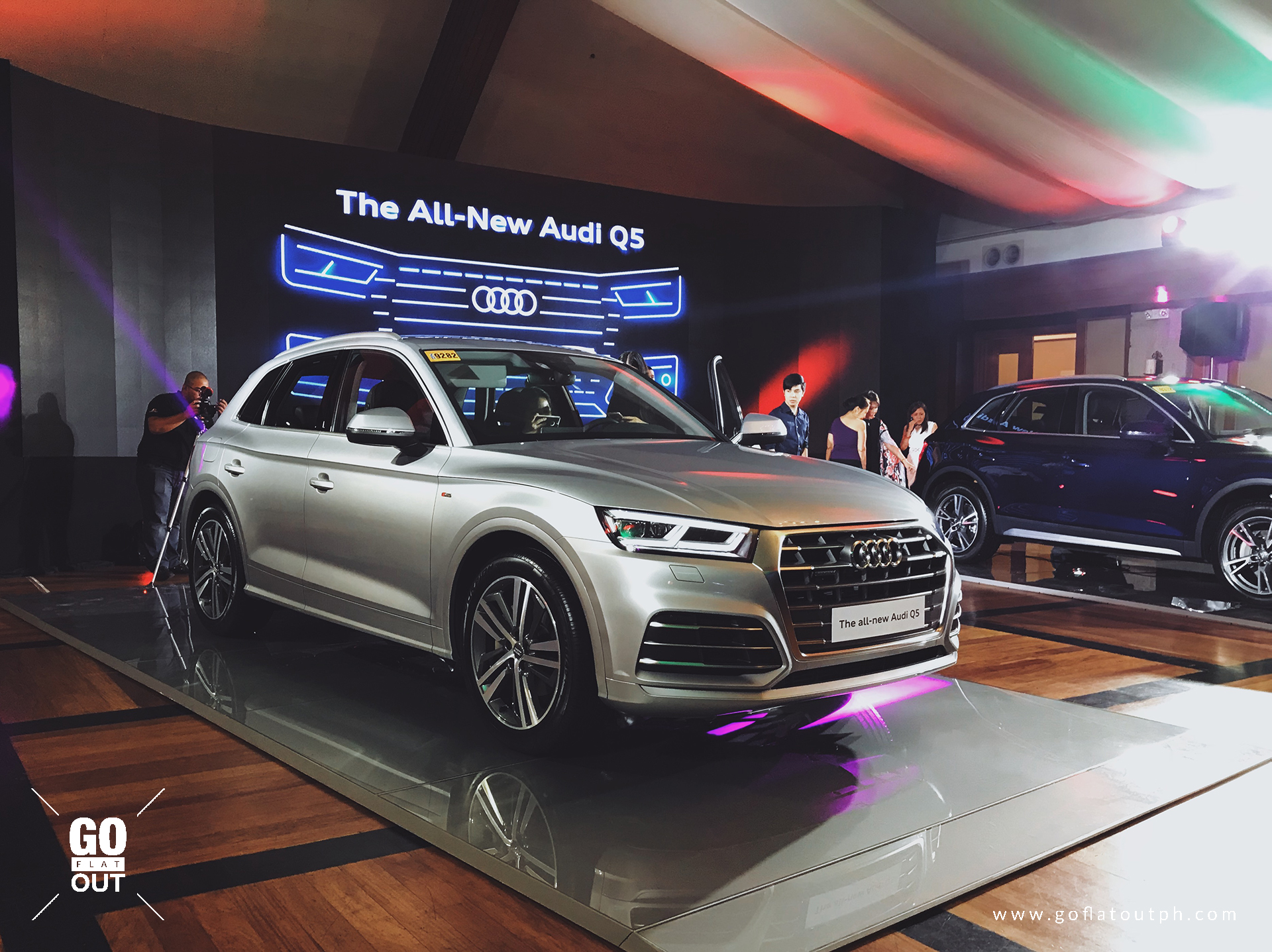 Audi Philippines held its posh launch event at the Manila Polo Club for the media and customers as an opportunity to show the all-new, tech loaded, Q5 compact SUV.

The exterior is very evolutionary, as expected from brands under the VW group umbrella, but it’s an exterior that is elegant, striking, and will be surely able to win the test of time. The Audi Q5 looks quite elegant and sharp, with its traditional Audi “singleframe” grilled and LED headlights. The top two variants get Matrix LED headlights for better illumination at night, and with the Matrix LED headlights come these super cool set of “sweeping LED turn signals” (video below). The S Line variant in particular, looks pretty sharp, which is dressed in 20 inch alloy wheels and a sportier exterior design, devoid of the black scratch resistant trim found in non-S Line models. The rear, meanwhile, has a flowing, coupe-like roofline that tapers towards the tail of the car, and wrapping the rear are a pair of LED tail lights. Overall, the new design creates a leaner, bolder stance than the first generation model, and while it is a bigger car than it replaces, it manager to be 90 kg lighter, thanks to mixed use of high strength steel and aluminum.

Inside, and the changes are very significant over the previous generations. You know how we at Go Flat Out loves Audi’s interiors over most of its competitors, and the Q5 is no exception. It is well built, and all the buttons and switches have that trademark Audi “click” when pressing it. It feels great in a tactile and aesthetic sense that even Mercedes-Benz and BMW often still try to match. Standard on all variants is Audi’s Virtual Cockpit, which is this large 12.3 inch TFT LCD screen that replaces your traditional gauges. It’s easy and intuitive to use, including Audi’s MMI (Multi Media Interface) system, which can be controlled via the center knob or the touch pad for writing down addresses or telephone numbers. The interior space is also bigger than before, thanks to its bigger exterior dimensions, and better packaging.

Powering the Audi Q5 are two engine choices, both of which are 2.0 liters in displacement, and have 4-cylinders. The first one is a diesel, which puts out 190 hp and 400 Nm of torque, enough for the SUV to sprint from 0-100 kph in 7.9 seconds, with the top speed at 217 kph. The petrol powered version, meanwhile, has 252 hp and 370 Nm of torque, with 0-100 kph times at 6.3 seconds, and top speed at 237 kph. Power is sent through all 4 wheels, as all models have Audi’s quattro AWD system, and are all mated to a 7-speed S Tronic dual clutch transmission.

There are three variants available called Design, Premium, and S Line. The Premium and S Line variants were the ones shown during the launch event, and these cars have features such as the aforementioned Matrix LED headlights, a wonderfully sounding Bang & Olufsen sound system, adaptive air suspension, and ambient lighting. Prices start at P4.9 million, and can easily top out past P6 million depending on the options fitted.