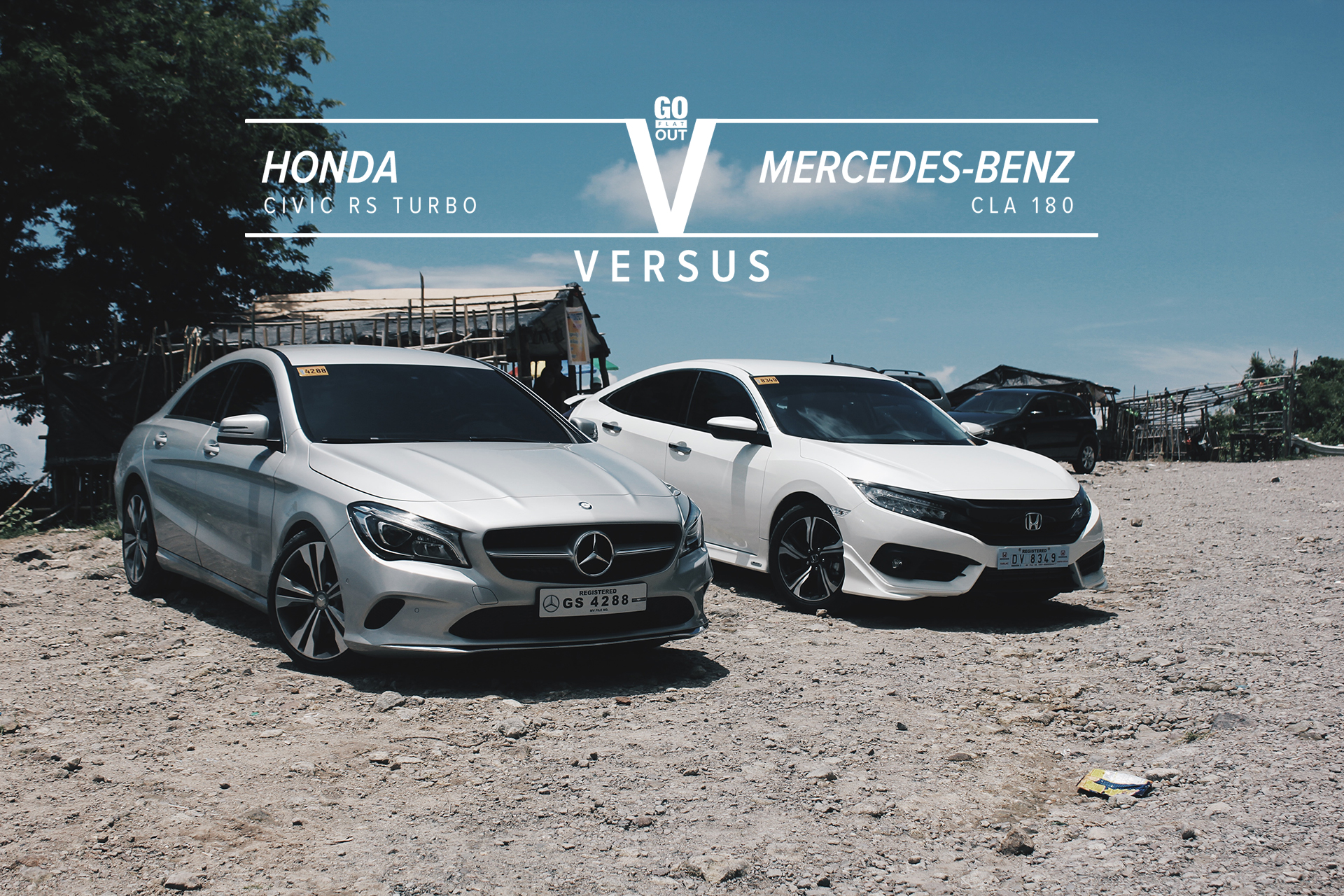 “Look past the badges, and they’re actually closer than you think.”

Mainstream compact sedans nowadays are now eating up into the sales of midsize executive sedans. As these cars’ prices have increased over the years, combined with numerous advancements in refinement, technology, and design, compact sedans have become so good, people would often cross shop it with a midsize executive sedan. It’s also a problem not alleviated by the booming popularity of SUVs globally. Also, many compact mainstream sedans nowadays are so good, people who are willing to verge into the lifestyle of owning an entry level luxury car often think twice on their purchase now. On our first edition of Versus, Go Flat Out compares top shelf mainstream compact sedan versus entry level luxury compact sedan. The two cars are a lot more similar than you think, despite differences in target market and price.

Both the Mercedes-Benz CLA 180 and Honda Civic RS Turbo possess seductive coupe-like styling, with their sweeping rooflines, curvaceous bodies, and sleek profiles. The new Civic RS Turbo is the boldest and curviest the Civic has ever been, and even one year after its release, it’s still catches attention. The long hood, short rear deck, gives the Civic the proportions of a rear-wheel-drive sports sedan. The optional Modulo kit looks a bit too much for our taste, and sort of spoils the European look of the Civic. The design is attractive, but it’s front grille is often polarizing to some people, but the rear, oh my goodness, that rear end looks sharp AF. Those C-shaped LED tail lights leave an distinctive light signature at night. The Mercedes-Benz CLA 180, despite possessing the same profile, is dripping with so much style and presence, especially with its more universally praised bold grille and large three-pointed star badge. If the Civic is attention grabbing due to its striking design, especially for a Honda, the Mercedes-Benz CLA is attention grabbing due to its presence, design, and the prestige the three-pointed star carries. Even if the CLA didn’t have the Mercedes badge, it wins the design test due to having the overall better design details than the Civic.

The interior is where the Mercedes-Benz CLA falls flat. While it looks nice and elegant, the materials are not as upmarket and premium as you expect a Mercedes to be. Sure, it has those nifty air vents straight from the Mercedes-AMG GT sports car, and the cool and elegant gauges, but there’s a large swath of scratchy black plastic on the lower parts of the cabin that are unacceptable at this car’s target market. The Civic’s interior, meanwhile, is not going to make Audi or BMW loose any sleep, but at P1.4 million price point, it’s quite upmarket for what it is. There’s a good load of soft touch plastics and some scratchy plastics everywhere else, which to be expected at this price, but not at a P2.5 million entry level luxury sedan. While design is subjective, it’s hard to ignore the cool factor of the Civic’s pulsating push button start and full TFT LCD gauge cluster with the start-up ceremony it gives when starting the car.

This is another aspect where the Honda Civic pulls ahead over the Mercedes-Benz CLA, practicality. Both cars have a sloping roofline, but Honda has managed to make the interior feel like a midsize sedan. The CLA’s space, meanwhile, is so-so. The sloping roofline eats into head space, and without slouching, Isaac’s and James’ heads are touching the roof. Legroom is okay, space for two is a company, but three is a crowd, resulting in shoulders of 2 full-size adults and 1 small adult rubbing against each other. Plus let’s also talk about the CLA’s door bins, or the lack thereof. None of the CLA’s door bins on any doors are able to store a large water bottle. The Civic, meanwhile, is a practicality fest. With large door bins on all four doors, a large glove box, a ginormous center bin, and loads of space to stretch out in the back, the Honda Civic is better in carrying five large adults. Sure, you might say they should compare the Civic with the C-Class, but actually, the CLA and Civic are dimensionally the same. The Civic is 4.63 m long, 1.79 m wide, and 1.42 m tall, while the CLA is as long as the Civic at 4.63 m, a little bit narrower at 1.77 m, and taller at 1.44 m.

In this respect, both are closely matched, with the Mercedes-Benz pulling just a little bit ahead than the Civic. Of course, you’d expect the Mercedes-Benz CLA to have more features, but we’ll compare them relative to their prices. Let’s start with what both cars have, in which both have automatic full LED head and tail lights, smart entry with push button start, leather interior, though the Merc’s is actually their Artico faux leather, though it manages to feel very nice, and a comprehensive infotainment system. Honda’s Display Audio with navigation is easy to use and responsive, plus it comes with Apple CarPlay and Android Auto. The CLA uses Merc’s entry-level version of their COMAND infotainment system, which of course isn’t a touch screen, and instead uses a giant knob near the armrest. Though it doesn’t have Apple CarPlay or Android Auto, we prefer this system as it encourages the uses of your muscle memory, enabling you to use the system without looking away too much from the road. Mercedes’ COMAND in its entry level version doesn’t have navigation, and utilizes a smaller screen fitted in our test car, but it can optionally be fitted with the more powerful version of COMAND with navigation. Regardless, you probably have used Waze anyway instead of your car’s built-in navigation, so the absence of navigation is not a big deal.

Safety is where the CLA pulls ahead of the Honda Civic. While both cars have a comprehensive amount of airbags, ABS and EBD, stability control, electronic parking brake with automatic brake hold, and Hill Start Assist, the Merc is fitted as standard with the basic active safety features, namely Distronic Plus (automatic emergency braking), PRE-SAFE (pre-collision mitigation), and Attention Assist (driver awareness monitoring). In other countries, the Honda Civic can be optionally equipped with similar same features that the Mercedes-Benz has through a suite of safety features called Honda Sensing. Merc’s Distronic Plus works well, not being overtly sensitive when it detects stupid tricycle and jeepney drivers unexpectedly spawning in front of you. While these features are still not common in the mainstream compact sedan class, the mere fact that it is equipped in some of the Civics rivals for the same price is a demerit for the Civic in this regard.

Powertrain and How It Drives

Both cars are powered by turbocharged and direct injected four cylinder petrol engine. The Civic RS Turbo has a 1.5 liter VTEC Turbo engine that produces 172 hp @ 5,500 rpm and 220 Nm of torque @ 1,700-5,500 rpm. Strangely, the Merc, which has a bigger 1.6 liter turbocharged, direct-injected petrol engine, produces substantially less horsepower, only 120 hp @ 5,000 rpm, but only slightly less torque, which is at 200 Nm @ 1,250-4,000 rpm. Both are mated only to automatic transmission, with the Civic utilizing an Earth Dreams CVT with paddle shifters, and the Merc utilizing their 7G-DCT 7-speed dual clutch automatic transmission. Fuel consumption for both cars is excellent, achieving figures of around 9-11 km/l on average in our hands.

With both engines being turbocharged, direct injected, and roughly just 0.1 liters separating the two, you expect the two engines to feel similar, right? Well, nope, and here’s why. Line these two cars up for a drag race, and 0-100 kph in the Civic is done in 7.2 seconds, while the CLA achieves the same feat a full 2 seconds slower. While torque is key in acceleration, the Civic’s engine offers its peak torque at a wider rpm range than the CLA, so as the revs climb, the Civic has more range to exploit its pulling power, and the same advantage is felt when overtaking. The CLA is no slouch though, but the Civic’s gobs of torque and its availability in a wider rpm range makes it a faster car in acceleration and in-gear overtaking than the CLA.

Put these two cars on a twisty road, and surprisingly, they feel quite similar. Both cars feel planted in the corners. Both cars feel quite sporty and extremely stable at high speed cornering, thanks to both cars’ excellent chassis rigidity and the suspension’s way of counteracting body roll. Steering feel on both cars give little feel, but are all both extremely responsive and accurate. Isaac said if he were to be put into a blind test drive, he would have a hard time separating the two cars apart.

In the city, the two cars start to diverge away from each other. The Mercedes-Benz CLA we have is optionally equipped with the AMG sports suspension, which not only lowers the ride height by 20 mm, but it also makes the ride quite harsh, a fact not helped by the 18-inch wheels wrapped in low profile 225/40 R18 tires. Even without the AMG sports suspension, the standard suspension is still quite firm for our roads plagued with potholes. For a Mercedes, it doesn’t have the level of isolation you experience from all of the premium brand’s other cars. The Civic RS Turbo ironically has better isolation from the road than the Merc, thanks to its better suspension damping and excellent sound insulation.

We go back to the question, which would Go Flat Out rather buy, a top shelf mainstream compact sedan, or an entry level luxury compact sedan? That depends on what your priorities are. For Isaac, he would pick the Honda Civic RS Turbo, because while both cars drive quite similarly, the Civic provides better refinement than the Mercedes-Benz, which is ironic considering the Mercedes-Benz is supposed to be a premium car, albeit an entry-level one. For James, while he finds that the Civic RS Turbo also drives excellently, he has an issue with the car’s image. For one, the Civic in the Philippines, especially the older EK models, are stereotyped for being bought by racer wannabes with their loud exhausts and large spoilers, placing bets with each other and drag racing illegally at Mindanao Avenue, while the image that the Mercedes-Benz projects makes you look like that sophisticated, tailgating driver at SLEX who seems to be always on a rush going to the next board room meeting at Bonifacio Global City. If it weren’t for the image issue, he’d pick the Honda Civic RS Turbo, but for this comparo, James is picking the Mercedes-Benz CLA. Image is a very subjective metric, let’s be honest, which means as a whole, you won’t have any problems with whichever route you’re picking. It all depends on one’s priorities.