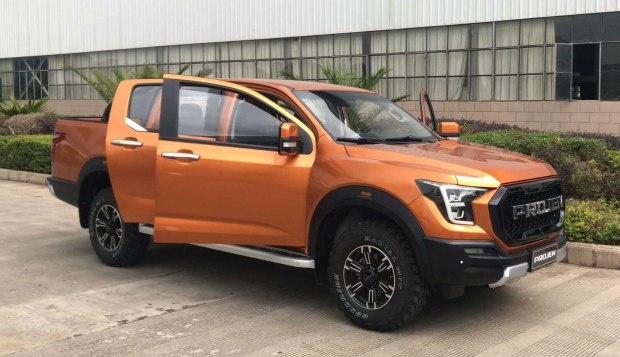 The Chinese are back at its trademark defying copying schemes, and this time, the Ford F-150 Raptor is the victim.

The car comes from a brand called Projen, and while the pick-up truck’s sales will still commence, we won’t be surprised if they find it difficult bringing it to the market.

The design is similar to the real thing (shown above), with the grille basically just like the Raptor’s, only difference is that it probably has quality issues, odd proportions, and the Projen logo instead of Ford. It also has skid plates, large wheels, though I don’t think they’re as wide as the Raptor’s, folding tailgate mechanism and design of the Raptor’s. Also, it is said to be powered by a 2.5 liter turbocharged engine with who knows what horsepower because these are the last cars on our minds that we find interesting to talk about.

China now makes great smartphones and laptops, under the names of companies like Huawei and Lenovo. We won’t be surprised if one day they make decent cars, especially with Chinese car companies buying many foreign brands, one of which is Geely buying Volvo, but there are still plenty of doppelgängers being cloned out by a number of car companies in China.

0 comments on “China Blatantly Copies Another Car, And The Ford F-150 Raptor Is The Victim”