Go Flat Out is no stranger to Fiat, especially its Abarth high performance tuning arm, and its Scorpion shielded badge. Is Fiat Abarth coming to the Philippines? We talk about it as we go for a drive.

We’ve seen Fiats abroad, and a couple of those Fiat Unos that were briefly popular in the Philippines back in the ’90s. We also know the brand since childhood, but this is certainly our first time to drive one, and upon first impressions, we really liked the car so much. With 145 hp in such a tiny car, power is evident, and its quoted 0-100 kph time of 7.8 seconds feels much punchier than the numbers suggest, thanks to that 1.4 liter liter T-JET turbocharged petrol engine that produces 145 hp and 206 Nm of torque. These figures might seem just normal for a compact sedan, but this is a small city car, so think of it as putting the heart of an elephant in a mouse. 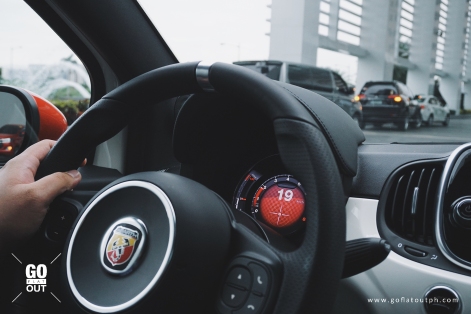 The clutch is friendly, forgiving, and easy to use, which is critical in a country that is voted by Waze users to have the worst traffic in the world, and while you are blessed with spare time to drive in traffic-free roads, you’ll appreciate the short throw, 5-speed manual transmission that shifts crisply. Putting it into sport mode boosts the engine’s torque, the exhaust louder and snarlier, and the suspension firmer. Speaking of the suspension, even though this is a small car with stiff sport suspension with Frequency Selective Damping at the front (MacPherson Struts at the front, Torsion Beam at the rear) it never feels jarring and unsophisticated, a far cry from the suspensions found in other small cars like a Hyundai Eon or Mitsubishi Mirage, which tends to bottom out often. Of course, we’re not comparing apples to oranges at this point. 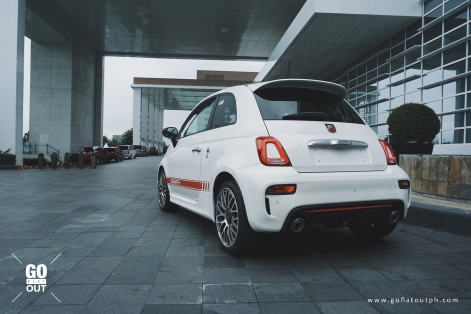 Once you stop at a parking lot or leave your car to the valet and look back at the car, you’ll realize that the Fiat 500 Abarth 595 looks unlike anything else in the Philippines, of course since Fiat has not been present in the country for a very long time. It has a distinctive sillhouette that is unique and easily identifiable as a Fiat 500 just by seeing its shape from afar. It’s the same type of identity and distinctiveness that a Porsche 911, Volkswagen Beetle, and Volkswagen Golf has. Even though the first Fiat 500 came out in 2007, which means it’s now a 10-year old car, it still looks great and classy, kept up to date with modern design details such as the Bi-Xenon HID headlights, LED daytime running lights, and other design cues, a testament to how timeless Italians design a car. The Fiat 500 Abarth 595 is further made more distinctive with its red exterior details, more aggressive bodywork, sporty multi-spoke 16-inch alloy wheels wrapped in 195/45 low profile tires, and a subtle Abarth text embossed in the lower mesh grille.

While you’re in the interior, take the time to appreciate its Italian flair. The sport bucket seats are supportive, and the interior layout is easy to use, contrary to reviews outside the country saying that the Fiat 500 doesn’t have good interior ergonomics. Trying out the back seats, the space is surprisingly roomy than I expected. Legroom was fine for such a small car, but headroom for my 182 cm height is poor, with me slightly bending my head to the left or right, depending on whether I’m at the left or right side of the rear seats, but sitting in the middle, I was able to have perfectly adequate room. While the Mini Cooper S, its chief rival, feels a bit more plush with its soft touch interior, the little Abarth matches it with funky details such as the body colored interior panel, cool-looking round high resolution TFT LCD gauges, and the user friendly UConnect touch screen infotainment system that’s shared with other cars within the Fiat Chrysler Automobiles group of companies. While our (posher) roads are littered mostly with German premium cars, how about trying something distinctive and Italian?

Priced at around P2.6 million, it is within the same ballpark as the Mini Cooper S 3-door. It must be noted, though, that they are not yet the official distributor of Fiat Chrysler Automobiles. FCA is currently conducting a feasibility study on the brand’s marketability in the Philippines. Regardless of whether the study goes, they guarantee to support the customers. As of now, there is no existing dealer yet, and vehicle sales are currently made via meetings, while preventive maintenance services and other aftersales services are conducted at Autoplus Sportszentrium‘s workshop. They soon plan to go full force in the market sometime in 2018. We wish the whole team for the best, and Fiat’s entry to the Philippines will surely be an exciting one.

0 comments on “Will A Fiat Abarth Dealership Open In The Philippines? (With Video)”