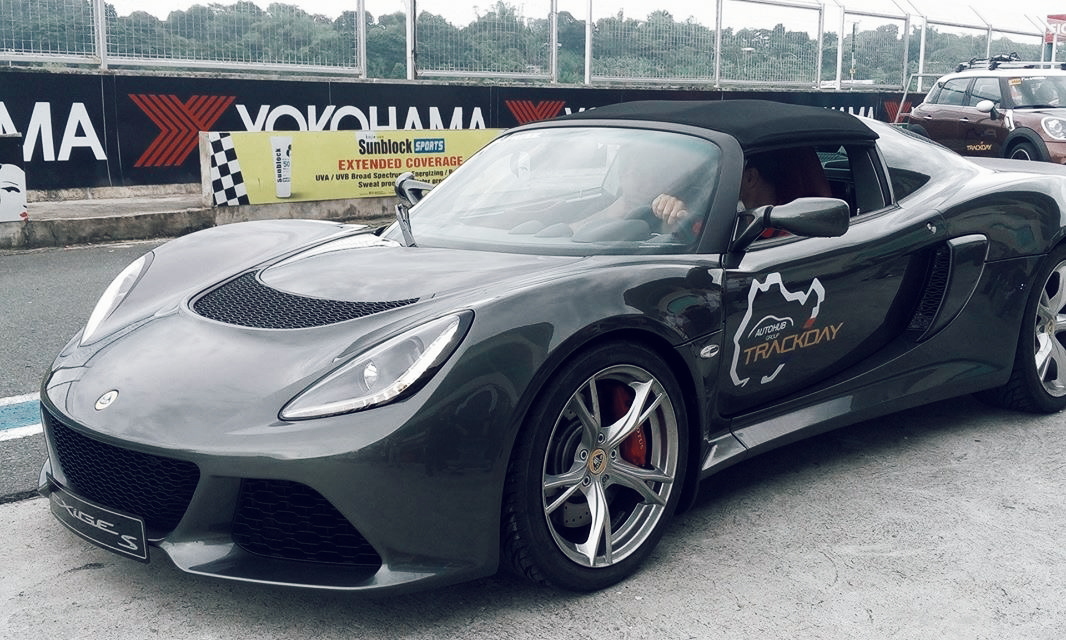 Sometime around the second week of October, we got a text from Mini Cooper saying that we’re invited to the “AutoHub Track Day” at Clark International Speedway, Clark Freeport Zone, Pampanga. As usual, we got really excited about it because exclusive invites on a track day event doesn’t happen all the time. Besides heading back to the track again, what really got our attention was that there will be three different brands of cars participating at the track which is the Ford Mustang, the Mini 3-door, Cooper S, Countryman and let’s not forget the British lightweight compact sports car, the Lotus Exige and Elise.

October 17, 2015– Due to our excitement, we grabbed our cars and left headquarters really early to avoid the usual traffic heading to our destination. Driving around 5am in the morning, when the road is yours for the taking, is actually one of the best ways to start the day. Excitement can be a pain sometimes since we arrived at Clark at exactly 7:45am, 15 minutes earlier the expected time. But hey, better early than late, yeah? So in order to kill some time, we decided to go around the venue to see the different cars on display. Some of the cars on display was the new Nissan “Juke”, Hyundai Tucson, Ford Everest, the New Mini Cooper S “John Cooper Works” and of course, the Lotus Exige and the Elise.

Even if the event started a little later than the scheduled time, it actually didn’t matter because what’s important is that the rain wasn’t dropping on us and the track was still dry.

Mr. George Ramirez started things off with a track briefing so that every driver would know the basics of driving at the track. Since there were 3 different cars to be tested at the same time, the track was divided into three groups. The Mustang drag races were held on the long stretch, while the Mini and the Lotus roamed around the track (without colliding with each other, of course.)

Luckily, we get to drive the Mini Countryman in order to participate at the “Mini Lapping and Italian Job” and the Lotus Exige for the “Lotus Collin’s Drive.”

The Mini Countryman didn’t disappoint us on the track despite only driving it one lap each. The car was giving us a good amount of power on each curve and apex even if the car is running on stock power. The car was very responsive as well! It’s even better the moment you put it on its manual/sports mode (and not to mention the great sound it makes every time you downshift while heading to an apex). You would also feel safe with the car because the braking system is pretty powerful as well so you won’t have to worry on crashing if you’re doing the apex right.

This is the Exige S, and probably the best Lotus ever made. The Lotus Exige S is the result when you combine mechanical elements with electronic wizardry, as you will find out soon enough.

First, the looks. The Exige used to be an Elise on steroids, but this time around in its second generation, it isn’t (entirely) the case. There are many unique design cues, such as its very wide stance, but the wide body isn’t all show and no go. The body is actually a tub, which results to the Exige S hugging the road much better, also thanks to the car’s wider track. The Exige S is powered by the same powertrain from the Lotus Evora S which is the supercharged Toyota 3.5 liter V6 motor. So, 350 bhp, 400 Nm of torque yet it only weights 1176 kg. The best part? It’s got a 6-SPEED MANUAL!

What you need to know is, this car is FANTASTIC! At last we have something tangible from the new Lotus. It feels quite like a Porsche 911 GT3, but with the joy of a manual, since the GT3, as we know, is only equipped with a 7-Speed DCT. The circuit was pretty damp due to light drizzles. Luckily, the car has some very clever systems in it. All the typical electronic wizardry we have become familiar with is fitted as standard in the Lotus Exige S, such as traction control and understeer control. This has got everything, perhaps except for a fridge, a bed, and a shower. There’s 4 modes to choose from, and these are touring, sport, race and then there’s everything off. We’re starting out in touring mode. Touring gives you all the help you could ever want, so we come out of this wet corner, my foot absolutely buried and it sorts everything for me. Sport mode gives us a sharper throttle, opens up a by-pass valve in the exhaust so we get more noise and a little bit of slip but not much, you can just give it a little correction and it’s there for me. Race mode is, well… You could guess what that button is for, but it sets the car’s ECU and learn the grip levels on the surface and gives you not much slip at all and Its just amazing. It’s almost like the gods of speed helping you out in each corner, simply unbelievable. Of course, there’s traction off when if you’re feeling a bit brave.

Some people would feel uneasy about driving a track-day racer but it is absolutely not that hard to drive. The engine is good, probably not as good as the flat-six from the Porsche 911 GT3, but it gets the job done. What’s amazing is that, it has the same power to weight ratio as a 911 Turbo, but without the weight penalty of the 911 Turbo, of course.

Handling is absolute perfection. It’s a Lotus, for crying out loud. It gives you this feeling or feedback that racing drivers have, it grips extremely well, yet if you wish, it willingly slides through corners. It just feels so real, so easy. Yes the ride is a bit firm, wait! Lets be honest, it’s really firm but who cares? You’re not going to pick your children in La Salle Greenhills with this thing. Steering is sublime and is full of feedback. In a day where power steering is the norm, the Lotus Exige S does not have power steering. It is heavy in daily use, yet out in the track, it steers in and out of the corner beautifully. It’s moments like this when we wish for a mechanical steering, because the feel and feedback a mechanical steering provides isn’t diluted by any electronic or hydraulic nannies. The Exige is s really fun car and we’re glad Lotus created a track monster!

The gearbox. I struggle to put it into gear specially when I’m in 2nd to 3rd cause my knees hit the steering wheel and makes it very annoying, but when you get it right, it rewards you like a kid getting his first star in kindergarten.

The interior of the Exige S, being a track-day car, is devoid of any luxuries, but the materials are still great. A bit of leather here, and little bit of aluminum there. The cabin is still awkward to get into and get settled, no thanks to the car’s tub, but the bucket seats are lovely. Ladies in skirts, you’ll have a hard time embarking/disembarking this car in a dignified manner.

So what do we conclude? The Exige S is quite a small car. No it isnt practical,  of course. Would we want one? The Exige S isn’t for everyone. It feels extreme and might not be the easiest car to live with everyday. No power steering so you will have to grow muscles and probably just drive instead if going to the gym, but still is a great “track” car, and we think that’s all it’s ever gonna be.

Overall, it was a day very well spent. Despite the horrible weather pouring on us later that day, we couldn’t think of better way to spend the Saturday with great company, great road trip, great track, and most importantly, great cars.