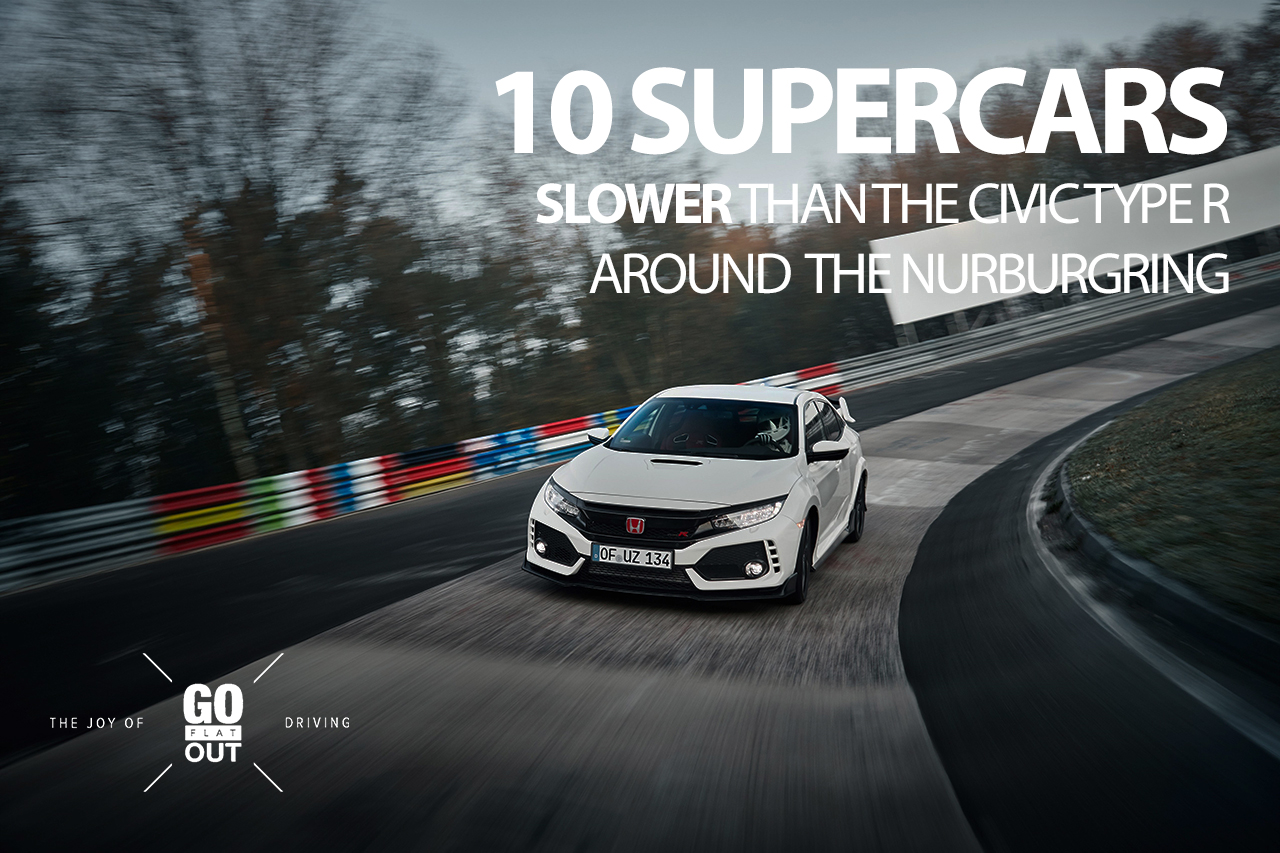 The 2017 Honda Civic Type R may be a humble hatchback fed with protein, but if there’s one thing we can all agree about, Honda has created a capable machine with this one. Lapping the Nurburgring in 7 minutes, 43.8 seconds, the Honda Civic Type R is actually faster than many of the supercars we love and lust about that also cost stratospherically higher than the Civic Type R when brand new or even used. Driving the front wheels with a 320 hp and 400 Nm of torque 2.0 liter 4-cylinder turbocharged and direct-injected petrol engine, the Honda Civic Type R has been a benefit of the technological advancements that has come to cars nowadays, enabling it to shame cars that cost a lot more.

Though most of these cars are now out of production, it should be noted that these cars represented the pinnacle of their time when they were first released. Even today, these are supercars that we desire to own, love, and even pull out our smartphones to take pictures of. So without further ado, here are some of the slower supercars than the Civic Type R in the “green hell”.

Well, first blood goes to the Audi R8 V8 with a manual transmission. Remember how much we were in awe when this car came out in 2007? Well, a humble Honda Civic on steroids is faster than this beaut of a supercar around the Nurburgring. Despite having a V8, and AWD, twice the cylinder count and wheels being driven of the Civic Type R, it was still slower around the Nurburgring.

Oh Aston. How I really am a fan of your luxurious GTs, but as it turns out, in the Nurburgring, the Honda Civic Type R is faster than you, but no matter. You’re still one of my most favorite cars of all time, due to its lustful beauty and sophisticated, elegant demeanor.

Likewise to the V8 Vantage, the DBS is even more beautiful, with its long dimensions, elegant, sculpted design, and potent and great sounding 6.0 liter V12 engine. Unfortunately, despite having more power and torque than the DBS, the Civic Type R is still able to eat you for snack.

One of the best handling Ferraris, the F430 with its F1 automated manual gearbox proved to be faster than the manual Ferrari F430, but not faster than the Civic Type R. The transmission also led to the death of the manual in the prancing horse brand, as many people opted for the paddle shift-operated transmission.

Well, we know that Nissan made continuous improvements to the R35 GT-R every year over the course of its already 10-year life, but the original version of the R35 GT-R was also slower than the Civic Type R. Godzilla has fallen under the hands of a Civic hatchback on steroids. A car capable of snapping Jeremy Clarkson’s neck when he reviewed this very Nissan GT-R was beaten by a humble Civic.

Lamborghini was not even under the mercy of the Honda Civic Type R. Powered by a 5.2 liter V10 engine and driving all four wheels, the Gallardo LP560-4 is still no match for the Honda Civic Type R’s front-wheel drive layout, 2.0 liter 4-cylinder turbocharged and direct-injected engine combination.

Produced in limited numbers, the BMW M3 GTS is expected to rise in value in the second hand car market. Fitted with a roll cage, no infotainment system, bucket seats, and no back seats, it’s the perfect recipe for a lighweight, fast track car, right? Well, sort of, because it wasn’t fast enough in the Nurburgring, but with its RWD laytout, great sounding naturally aspirated V8 engine, and 50-50 weight distribution, the BMW M3 GTS should still manage to be more fun to drive than the Civic Type R.

The Ferrari 599 GTB Fiorano, before the F12 Berlinetta was released, used to be Ferrari’s peak of the stable. With a V12 engine and more than 600 horsepower, clever aerodynamics, and an innovative magnetic suspension, it was still slower than the Honda Civic Type R around the Nurburgring.

Remember how much we loved the Lamborghini Murcielago LP640? Despite its cool, scissor doors, and Miami Vice looks, the Murcielago is still beaten by the Civic Type R despite the faster E-Gear Automated Manual Transmission.

The legendary Porsche 911 GT3 RS. The epitome of Porsche’s excellence in producing great handling sports cars, but, it was still slower than the Honda Civic Type R around the Nurburgring. However, I’m still pretty sure the 911 GT3 RS is still a more fun to drive car than the Honda. It’s a Porsche, for crying out loud. Need I say more?