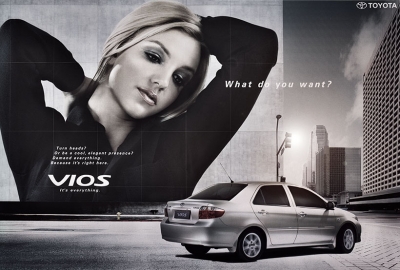 Back in 2003, when Toyota was launching its then all-new Vios in the Philippines, a sedan version of the popular Toyota Yaris/Vitz/Echo, depending on what country you’re in, Toyota partnered with Britney Spears to market the all-new entry level sedan. As a kid, I remember watching MTV with her popular songs back then, and this Toyota Vios advertisement plays during the commercials.

Whenever the Toxic singer’s commercial plays in the TV, one of her popular songs called Anticipating plays in the background when a Toyota Vios passes by her billboard. The song is instantly recognizable, not just to her fans, but basically anyone who’s into music during those times, and literally everyone would glance at the screen, dancing and singing along, not knowing that the all-new Toyota Vios is being advertised to them. She advertises is with the tagline “What do you want?”, highlighting that the Vios is everything that “we want in a car”. The advertisement managed to attract many buyers, as it was during those years where Britney Spears’ career was at its peak. She was able to make what is essentially your normal, everyday mundane appliance back then, into something that is desirable, something cool, something you’d be proud to be seen in, and you were somewhat cool back when you had one.

Nowadays, it’s not the high profile celebrities that is making the Toyota Vios cool in the Philippines. It’s actually the Toyota Vios Cup, in which many celebrities and prominent people are also part in. Actually, I think even if Toyota doesn’t market the Vios, people would still buy the car, as it is the country’s best selling car in the first place, selling well over 30,000 units annually.

If Britney Spears were to advertise the Toyota Vios again, do you think she would make the Vios look even cooler?

0 comments on “Remember When Britney Spears Made The Toyota Vios Look Cool? (With Video)”