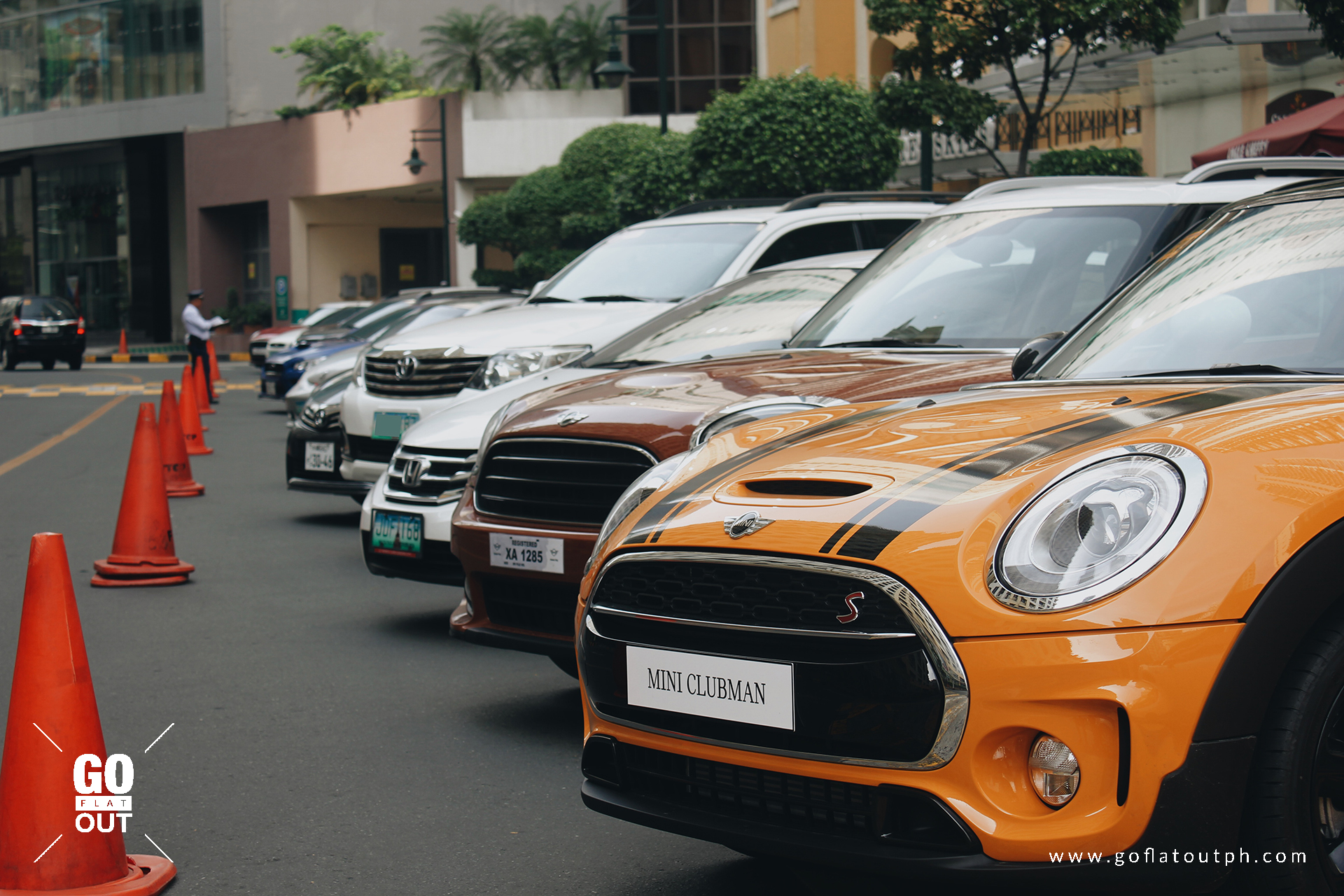 Go Flat Out joined the first ever Petron Mabuhay Independence Auto Rally, a TSD (Time, Speed, Distance) rally that aims to test a driver’s skill in navigation and driving within a set time and speed. Hosted by the one and only International Racing and Rally Champion, Mike Potenciano with partner Lindy Pellicer. We were lucky enough to be one of the participants in this historical event, since it will be the first TSD rally held here, we thought it was a very good opportunity to experience this particular motorsport. This motorsport is more than driving fast. It’s about driving at the right speed, at the right time. Tricky stuff, but we’ll dig into further what a TSD rally is.

As the name suggests, a TSD rally is concerned at your time, speed, and distance. All these factors combine to make a TSD rally more challenging than it sounds. It goes by the simple rule that you should arrive at your destination on time, every time. Your car shouldn’t arrive too early, or too late. It should be right on the dot. How do you successfully complete a TSD rally?

Well, first it begins with being familiar with a TSD rally notebook, and it should look something like this.

As you can see, distance, direction, and average speed, are given at each action point. Basic physics dictate that speed is a measure of distance divided by time, so since you’re looking for time, keep in mind this formula (multiply the value again by 60 if you want to convert it to seconds).

The answer that will be calculated is the time needed for a car to complete each action point. The final computed value should also include the bonus time, as the bonus time considers possible delays that a driver will encounter when in a stoplight. Sounds easy, right? Not quite.

Firstly, electronic gadgets, especially that those that have any form of radio  or electronic communication is not allowed during the entire rally. These electronics can be used for navigation, and therefore defeats the purpose of the rally. The driver should only rely to its partner, the navigator, for directions to the end point. Speaking of which, it is a must that you have a navigator, as you won’t be permitted to drive solo during the rally.

Second, the odometer must be set to zero upon starting. This will guide you, the driver, in navigating. Notice that there is a total and interval in the road book? The total should match the distance in your odometer, so that you will know when to turn left or right based on the distance.

Last but not least, the time in your car and watch should be synced with the official time of the rally, because if your clocks are out of sync, you might arrive at your destination either too late or too early, as the marshals use the rally’s official time as a reference.

Have we missed anything on the rules? Let us know in the comments and we’ll surely add it in the article for the viewers to be aware as well.

We went through two briefings about the whole TSD rally, also discussed the complexity of it, how we’re suppose to do calculations on Time, Speed and Distance. All this was held at MINI Showroom BGC on 26th Street, thank you MINI for your hospitality and of course Autohub for providing great cars to look at during the briefing. So, one day before the main event we were tasked to do a practice run just around BGC area with our own cars. We were to start at MINI Showroom all the way around town and finally finishing back to MINI, of course it was all timed and there were checkpoints placed. A real practice run of what’s to come.

On to the main event, its was at around 8 a.m. when we reached L’Entrecote restaurant at Burgos Circle, BGC. Our Start/Finish line. We stickered up the cars, Isaac Atienza being car number 4 and James Tagle being car number 7. Excitement and tension is all I was feeling during our last minute briefing, I was eager to get a move on and tackle this rally. Of course Isaac was the one computing all the maths and making the arrangments in our little group. On this event, we have 2 non-members of the Go Flat Out Team. They were Larry Padernal, he is a very good and a long time friend of James Tagle and Justin Villareal who we needed on a very short notice. As these two haven’t got any clue as to what we were about to do, Isaac had to quickly illuminate them on what was about to go down. As we were about to be flagged for the start, each participant was given one minute intervals to start.

So we set off from L’entrecote, and though we practiced during the last briefing around BGC, me and Justin were already in trouble just slightly after the beginning of the rally, while going through McKinley. I was clueless to my partner Justin, and I was completely relying on him when we took a wrong turn in McKinley. As we drove along, we weren’t the only ones who were lost, as other drivers were also getting lost, too. At that point, I couldn’t think of a strategy to solve this, so we skipped some action points along the way, and went through the action points in destinations that are familiar to us. Oops, I think I shouldn’t have said that. Let’s completely forget we were talking about this, guys. Okay?

Upon arriving at Makati City, the struggle to find Petron was real. Me and James, along with his team mate Larry, were lost in Ayala Makati Central Business District, as I had no idea where the Petron gas station is. Me and Justin reached the point where we just decided to skip more action points and go straight to Greenbelt 1, since it’s a destination I’m familiar with.

The craziest part was when we were having a debate in NAIAX. This part you won’t see in the video, as the cameras weren’t recording during that time. On the way to Okada Manila, I was already in an argument with my partner, Justin, whether to take the next exit or not. Since it indicated Okada in the road book, then it must be in Entertainment City, and I was completely sure of it, but Justin insisted I take the exit going to Cavite, and so I decided it might be okay to follow his instruction because even if he would be wrong, you (supposedly) can turn right from CAVITEX anyway in order to pass through the now abandoned Uniwide Coastal Mall. Lo and behold, as I followed his advice and went to CAVITEX, that road now disallows turning right. Great! Great indeed, and this meant I had to go through Las Piñas exit just to get back to Entertainment City, but that didn’t let me ruin our vibe, since anyhow, this is a rally, a day that we should have fun, right?

As expected, our car arrived extremely late at the final destination of the first round, which is Petron in Macapagal Avenue. So we took a break, had lunch, and then set off again back to BGC.

On the way to BGC, we thought of a strategy that we completely failed to consider during the rally. The route in the second round is substantially easier than the route during first round. This is when we decided to be mindful of my car’s odometer instead of being conscious with the time and speed, since our problem during the first round was when to turn left or right. This is when we also realized the value of the total distance and interval distance in the road book, since upon realizing this, we went through the second stage cleanly and without any drama.

On our first stage, we were clueless. As you can see in the film, we were everywhere. It was a nightmare, and here I thought rallies were effortless. We had to be on time all the time, that was the name of the game, I’m pretty sure Isaac has already explained the mechanics so I’ll skip that part. It was tense. My navigator and I were completely on opposing sides which route was correct. During the course, we had multiple checkpoints that were time barred and some D.I.Y. checkpoints where in we had to take photographs of landmarks that relates to our Independence. I have to be honest, history isn’t my forte so I just took photos of everything I saw. At this point we were completely lost. We were in Makati area and we had to make a checkpoint stop at some Petron Station. Question is, where is that station? We went around for what seems like an hour or so stopping at at least 3 Petron Stations before we found the right one. From there, we knew we were very late. We still haven’t seen any participants so we decided to just head to our re-grouping area which was at another Petron Station all the way to Macapagal Road. Funny thing was, when we reached that point, Isaac and Justin were no where to be seen. I’ll let Isaac explain that bit! Ha ha!

So here we are, stage 2 of our rally. Everyone was still pumped and energized while I was having a sandwich thinking to myself how we’ll get the advantage on the 2nd stage. For this part of the race, we decided to swap places, I being the navigator and Larry the driver. The thing is though, nothing really special happened on the last part. It was an easy stage, or I would like to think I was just very good at navigating. For the first time, we knew what we were doing! We had our times very competitive with other participants and we even got to a checkpoint were we had the least number of demerits! As for Isaac and Justin, well that’s a whole other story.

Due to the fact that Car #4 got lost going to CAVITEX, plus because the car has an RFID tag, which meant that Isaac also failed to collect the toll tickets, he incurred 2,493 demerits. Car #7, meanwhile, fared better, completing all but one of the checkpoints, and all the required items throughout the rally. While neither cars won any individual awards, Go Flat Out team ultimately wins 3rd place in the Team Awards. Because of this, we were given a set of three bottles of car shampoo from Pristine. Additionally, as this is a Petron sponsored event, everyone went home with free 20 liters of fuel from the leading Filipino oil refining company. The P500 registration fee is already a steal from the moment it was announced that Petron will be sponsoring the event.

As an entire experience, we had a lot of fun. We enjoyed driving through and getting lost in Manila, as this also is a different and completely new way of discovering new places. There were hiccups here and there and getting lost along the way, but we thoroughly enjoyed it. Go Flat Out is part of history, as we are one of the pioneers of the first ever Mabuhay Independence Auto Rally, and as always, there will never be a first ever, ever again. To more rallies by Mike Potenciano! We’re happily waiting for the next one. Oh, and enjoy the video, everyone.

Processed with VSCO with a6 preset